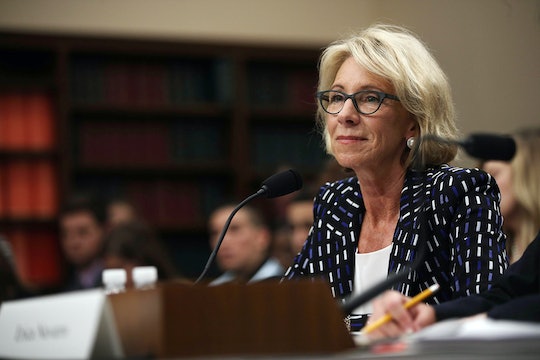 When Secretary of Education Betsy DeVos was confirmed to the position earlier this year, she wasn't exactly a popular pick. Many Americans were concerned over her strong views on school choice and vouchers, and her seeming lack of commitment to things like supporting students with disabilities, or taking a firm stance on gun control. Now, she's made a big decision regarding sexual assault on school campuses, and it's yet another that many Americans aren't going to like. Wondering how to support sexual assault survivors after Betsy DeVos ends Obama's Title IX guidance? Advocacy groups need your help.

On Friday, DeVos rescinded the Title IX guideline that had required colleges and universities to more aggressively investigate claims of campus sexual assault, replacing it with what she called "interim guidance," according to The Los Angeles Times. Critics of the Obama-era guideline argued that it "placed too much pressure on school administrators, favored alleged victims, and lacked due process for people who had been accused of sexual assault," while those in favor said the guideline was necessary to better address the widespread issue of sexual assault on school campuses.

In a statement following the decision, according to The Guardian, DeVos said,

This interim guidance will help schools as they work to combat sexual misconduct and will treat all students fairly … schools must continue to confront these horrific crimes and behaviors head-on. There will be no more sweeping them under the rug. But the process also must be fair and impartial, giving everyone more confidence in its outcomes.

That all sounds fine and good, but will the decision actually mean? For one, according to The Guardian, college and universities will now be able to decide which standard of evidence to use when handling complaints — an incredibly controversial idea, and one that Obama tried to address by specifying that schools must us "the preponderance of the evidence standards," which would make it easier for survivors to come forward and actually see their abusers convicted. DeVos' decision would now allow schools to use “the clear and convincing evidence standard,” which is a harder stand to meet.

The frustrating truth about sexual assault is that the system that is meant to protect them doesn't often work in survivors' best interest. A 2015 survey of American college students found that 23 percent experienced some form of unwanted sexual contact, according to CNN — and that in 11 percent of those cases, it included penetration or oral sex. Yet many women said they didn't actually report it, citing reasons like they "didn't think it was 'serious enough,'" or that they were "embarrassed [or] ashamed." Other women said they thought speaking up would be too difficult, or that, even if they did, nothing would really come of it.

The Obama Title IX guideline instituted certain requirements meant to address some of these issues — like the fact that all cases brought forward had to be adjudicated, for example, and that it would have to happen within approximately 90 days, according to The Los Angeles Times. But DeVos' changes will now allows schools to instead "facilitate an informal resolution process if both parties agree," (despite the fact that there's already a major issue with survivors feeling unable or unwilling to come forward in the first place), and takes away any recommended timeline.

If you're one of the many people who are feeling as though the country just took a big step backwards, then it might be a good time to do something to help. The easiest way might just be through a financial donation to an organization that supports sexual assault survivors — and the good news is that you've got a lot of options. To name a few, there's the Rape, Abuse, and Incest National Network (RAINN), who runs the National Sexual Assault hotline and live chat; The National Alliance to End Sexual Violence, which offers education and advocacy; the National Organization of Sisters of Color Ending Sexual Assault; or End Rape On Campus, which obviously deal specifically with campus sexual assault.

But giving money isn't the only way that you can help sexual assault survivors. Making sure you're knowledgeable about sexual assault, and that you understand and are empathetic to the struggle faced by survivors can be so important — after all, even if you don't think you know someone who has been affected by sexual assault, statistically, you probably do. What does it mean to be supportive to a sexual assault survivor? According to Everyday Feminism it basically means remaining free of judgment or preconceived ideas, and just being there to listen, and to remind them that they have allies and people who are behind them 100 percent.

As advocacy group Pandora's Project notes though, sometimes knowing the right thing to say can be tricky. There are a number or things you'll want to avoid when trying to be there for an assault survivor, including any comments that can feel minimizing ("you'll be OK," "it wasn't that bad," or any suggestion that they should get over it and move on), as well as giving unsolicited advice. Most importantly though of course, is that the very last thing a sexual assault survivor needs to hear is that they were in any way asking for it, or that they somehow could have avoided it (they weren't, and they couldn't have). And if there's any part of you that might think that, it could be a sign that you may not be quite ready to offer the emotional support a sexual assault victim deserves.

DeVos' decision is unfortunate, and while her supporters say it's a positive move meant to ensure fairness, it really only seems like chipping away at progress that was already not even close to being enough. There may not be a ton that anyone can do about that though, but by stepping up individually as advocates to support survivors, we can send a message so much more powerful than anything DeVos is capable of in office.