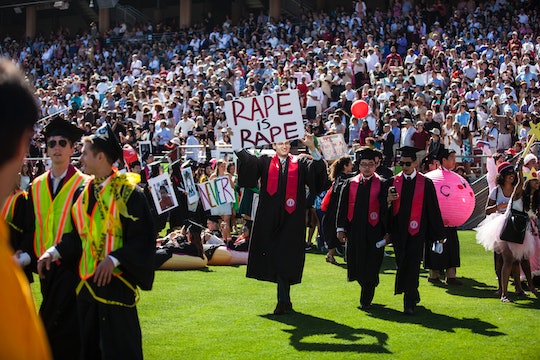 How To Support Sexual Assault Survivors After Brock Turner's Release

On Tuesday morning, Brock Turner registered as a sex offender at the Greene County, Ohio, sheriff's department, according to NBC News. Turner is the former Stanford student convicted of sexual assault whose case drew national attention in June after he was handed an extremely light sentence, and his victim's response went viral. While the identity of "Emily Doe" was thankfully kept private, there are ways to support her and other sexual assault survivors, many of whom are no doubt having a tough time coping with the fact that Turner's outrageously short sentence was cut even shorter.

In March, Turner was found guilty by a jury on three felony counts: assault with intent to commit rape of an intoxicated or unconscious person, sexual penetration of an intoxicated person, and sexual penetration of an unconscious person. Although prosecutors asked for six years in a state prison, Judge Aaron Persky sentenced Turner to just six months in a county jail, followed by three years of probation, according to ESPN. Turner was released on Friday after serving just three months. Emily Doe wrote in her victim's statement that she now has to sleep with the light on, and is "afraid to go on walks in the evening, to attend social events with drinking among friends where I should be comfortable." We can't protect every victim in this world, but there are steps we can take to support them.

While I'm generally very wary of "visibility campaigns" that amount to little more than slacktivism, this is one of the exceptions. Sexual assault victims' suffering is often compounded by feelings of isolation, so it's important to stand up and say, "I hear you, and I believe you." Attend a protest. Retweet a hashtag. If you're comfortable, share your own story. Call out negative comments anywhere and everywhere, from a stranger's misogynistic comment on a Facebook news article to your uncle slut-shaming pop stars at Thanksgiving. Rape culture can only persist if those who oppose it stay quiet.

If a friend discloses to you that they've been sexually assaulted, listen without pressing for more details than they feel comfortable sharing, and never ask questions that could be interpreted as victim-blaming, such as "How much did you drink?" or "What were you wearing?" It will probably be an uncomfortable conversation, but remember these key phrases, courtesy of the Rape, Abuse & Incest National Network: "It's not your fault," "I believe you," and "You can trust me." Offer to accompany your friend to seek medical attention, therapy, or file a police report, but don't insist that they do any of these things. Know Your IX recommends that while you obviously shouldn't minimize what happened, it's also important not to catastrophize; only the victim knows how deeply they were affected, and it's not your place to tell them how to feel. Above all, just be there and listen. It can do more good than you realize.