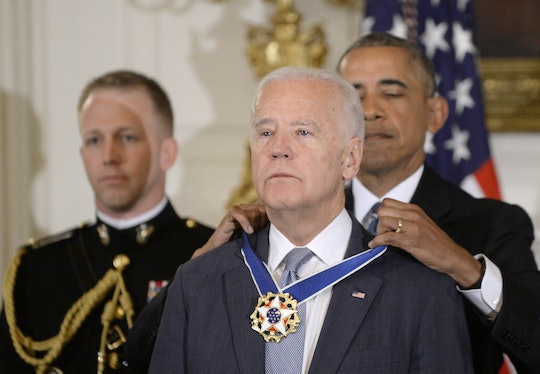 How To Support The Biden Foundation

Vice President Joe Biden hasn't even been out of office for two weeks, but apparently, that's more than enough vacation time, because on Wednesday, he announced that he's started a charity championing multiple causes close to him and his family. While we can't have him back in the White House (at least, not yet), here's how to support the Biden Foundation, so he can continue his important work.

According to a statement on the foundation's website, it's "dedicated to exploring the ways that everyone – no matter their income level, race, gender, age, or sexuality— can expect to be treated with dignity and to receive a fair shot at achieving the American Dream." The foundation will be led by Biden's sister, Valerie Biden Owens, former Delaware Sen. Ted Kaufman, and former Biden employees, Mark Gitenstein, Jeff Peck, and Mark Angelson, according to the Washington Post. Apparently taking a lesson hard-learned by the Clinton Foundation, it won't accept donations from foreign citizens, but it will accept them from private foundations and corporations. The chief causes it aims to address are violence against women, a longtime concern for the former vice president, affordable education, a pet cause of his wife, Dr. Jill Biden.

In honor of his late son, Beau, the charity will also focus on supporting military families, fighting cancer, and protecting children. Beau Biden served in the National Guard before succumbing to brain cancer in 2015. A separate charity, the Beau Biden Foundation, is dedicated to protecting children from abuse, and his father's foundation also counts this issue among its causes. Beau had long encouraged his father to run for president, but Joe sat out the 2016 election because he was still grieving from his son's death. Luckily, he's found another way that he can help America with his new foundation.

According to the Los Angeles Times, Biden is expected to announce his partnership with the University of Pennsylvania and the University of Delaware soon, in addition to partnering with President Obama to support Democrats in 2020 state legislative races. His foundation, which will also fight for equality, the strengthening of the middle class, and preserving democracy through foreign policy, is still in its infancy, but supporters can now sign up for a newsletter to keep abreast of its activities, and of course, donation are being accepted. In these dark days as a new America arises, the Biden Foundation shines like a beacon of hope.