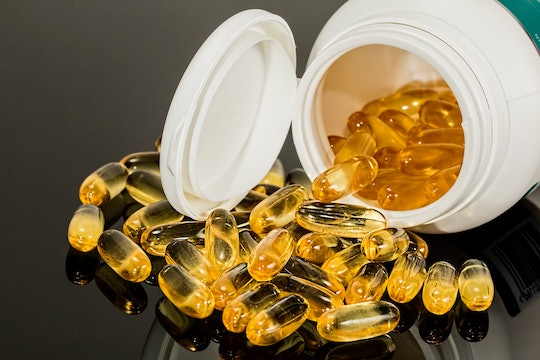 How To Take Your Prenatal Vitamins Without Puking, & Yes There Is A Way

It seems like the cruelest of jokes: You finally emerged from the haze that was first trimester morning sickness, only to find that your prenatal vitamins are still making you nauseous. As tempted as you may be to just toss the whole bottle in the trash, you know enough from your medical provider not to actually do it. Your baby needs those nutrients, so you need to know how to take your prenatal vitamins without puking.

Dr. Sherry Ross of Santa Monica, California tells Romper in an exclusive interview that its the high amounts of vitamins and minerals in a prenatal vitamin that causes the notorious nausea. But, Ross says, gestating moms needn't despair — there are ways you can decrease the impact it has on your system. Be sure to always take your vitamin on a full stomach, or you might try experimenting with taking it right before you fall asleep at night instead. While there's a chance your nausea might be severe enough to wake you up, the odds are you'll sleep blissfully through it.

Another idea Ross mentions is cutting the pill in half and taking one part in the morning and one part at night. There's no pregnancy rule that says you have to down the whole thing at once. Think outside the box.

Ross also says that some women have an easier time digesting the types of prenatals that you take three times a day rather than only once, since the vitamins and minerals are not as consolidated. Many women find the gummy varieties are easier on their stomachs. If all else fails, Ross says she has recommended to some of her patients that they take a multivitamin instead of a prenatal until the point in pregnancy when their stomachs are strong enough to handle it.

If your prenatal vitamin is making you miserable, don't sit around and do nothing. With a little ingenuity and some tweaking, you should be able to find a system that works for you and your growing babe. Giving up on prenatals completely isn't the answer, but neither is living with a constant stomachache. A middle ground exists and if anyone can find it, it's you.

More Like This
Yes, It’s Possible To Get Pregnant If You Have An IUD
Pelvic Pain During Pregnancy: What Causes It & How To Deal With It
Can You Give A Sleeping Baby A Breathing Treatment? Experts Explain
Here’s Why Your Vagina Itches At Night, According To Experts