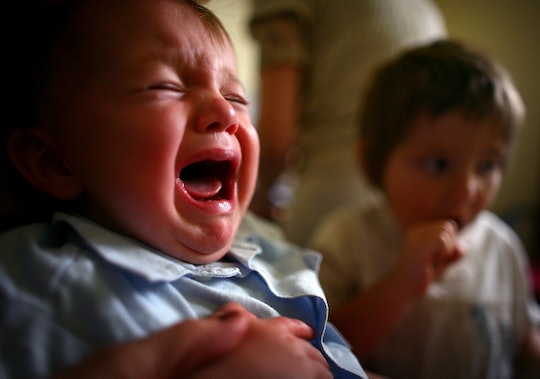 How To Talk About Autism & Vaccines With Other Moms

There is almost no topic that will whip up more emotion among a group of mothers than the battle over whether vaccines cause autism. Both sides have that particular mix of fear, rage, and conviction that always makes for the most intense, and widely participated in, brand of conversations. But these discussions almost never actually accomplish anything beyond further entrenching each side in their point of view. So how do we talk about autism and vaccines with other moms?

Spoiler: you do it with kindness and respect.

The rates of autism diagnosed in kids is rising at a staggering rate. According to the Centers for Disease Control, about one in 68 kids are diagnosed as falling somewhere on the autism spectrum. In 2000m that number was 1 in 150. Those numbers mean an ever increasing number of moms looking for answers, where there are few. One of the likely explanations is that doctors have gotten better at knowing the signs of autism and of diagnosing cases where someone falls on the highly-functioning end of the spectrum. But, for many, this explanation isn't good enough. Instead, many claim to have seen a link between their child's vaccination and autism symptoms. Trying to convince them they just imagined the whole thing and there is no scientific evidence to support their claims seems pretty unlikely.

But there are real consequences for the rest of us who think it's ridiculous to allow diseases like the measles to make a comeback simply because a few parents distrust a mountain of scientific evidence that says there is no link between autism and vaccines; especially when you consider the dangers these diseases can pose to kids who are too young or too sick to get vaccinated and who rely on everyone else to keep outbreaks at bay.

So, how can you possibly have a rational conversation that meets someplace in the middle of these two passionate positions about how people can keep their kids safe?

Since I've become a mother, one thing I've learned is that there are all kinds of parents. Young, old, fat, skinny, religious, atheist, attachment, free-range, and yes, even anti-vaxxer. And since I've become a mom and met and talked about our shared experiences, I've learned that parents are all doing the very best they can for their kids. Raising kids is a tough job, and parents need each other and they need to be able to communicate openly, honestly, and with kindness and support. And when they do, they're all better for it.

No matter which side of the anti-vaxxer argument you're on, there are wonderful moms on both sides. There's the pediatrician who has dedicated her life to medicine and sees kids suffer needlessly through diseases for which there's a simple prevention. I had a conversation like this with my own pediatrician just a couple of weeks ago.

Then there are the mothers with kids on the spectrum who fight every day to understand their children, and, in turn, help them make their way in the world. And they believe they have been lied to about the real dangers of vaccines and autism. And their stories are compelling and worth hearing.

We need to have more honest and open discussion — not less. Autism and vaccines are things that impact all of our kids. It's more important than ever for moms to come together and have an open dialogue about what they're seeing in their own kids and the fears they have about their kids' health.

It's that kind of shared experience and wisdom that moms have relied on for thousands of years to raise their babies.

So even though the topic of vaccines and autism might make you want to scream, try and remember that we're all on the same team. Open, honest, but kind, communication is the only way we will ever be able to hear each other and protect our kids.

More Like This
Julia Fox’s Apartment Tour Is Peak Mom Realness
Doctors Swallowed LEGOS To Prove Everything Is Awesome For Kids Who Do The Same
Does The FDA's Plan To Limit Lead In Baby Food Go Far Enough?
Covid Vaccine “Deserts” For Kids Under 5 Make It Almost Impossible For Parents To Find Shots
What Parents Are Talking About — Delivered Straight To Your Inbox