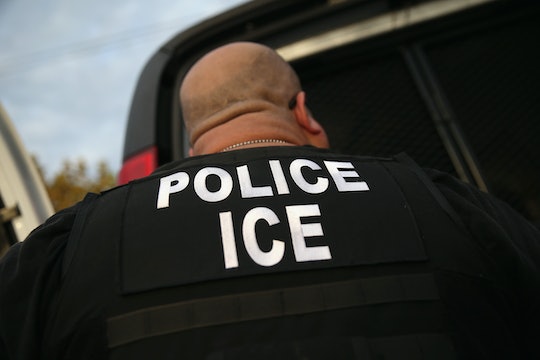 How To Talk To Kids About Immigration

As the Immigration and Customs Enforcement raids across the country continue, parents may wonder how to talk to their kids about immigration and deportation, in order to prepare them in case they witness — or become caught up in — a raid. Current ICE policy designates schools as "sensitive locations" where "enforcement actions" should not be carried out unless there are exigent circumstances, but there's no guarantee that policy will remain in place. There have already been reports of teenagers being arrested at school bus stops, and there have been anecdotal claims on social media of ICE agents waiting outside of schools in order to detain parents. ICE has not responded to Romper's request for comment regarding whether ICE officials have visited schools, even if to just wait outside and ask questions.

Children of U.S. citizens may know little to nothing about immigration or deportation. Teach your children that people are not illegal, and while an undocumented immigrant can be arrested, that doesn't mean that they're a criminal. Explain to them that most people who live in the U.S. without permission do so because the path to legal citizenship is long, difficult, and costly. People who circumvent the law usually do so because their country of origin was unsafe, or because they were unable to make a living there. Living in the U.S. undocumented can be extremely challenging, but sometimes it's better than staying where they came from. Some people also arrive in the U.S. legally for a visit, but circumstances change and they end up staying longer than they originally planned.

Kids should know that ICE are like the police, and for their own safety, they should never interfere with agents if they witness someone being detained, even someone they care about. All kids, regardless of their immigration status or their parents', need to know their rights if they're approached by law enforcement: while the requirement to provide your name to law enforcement varies by state, all people — adult or child, documented or not — have the right to remain silent and refuse to be searched. Kids should also be taught not to comment on their own immigration status or the status of others, and ask, "Am I being arrested or am I free to leave?"

Kids with undocumented family members will need to be taught a few more things. They should know not to open the door for anyone they don't know (this can be considered consent for law enforcement to enter without a warrant). Parents should have an emergency plan for their kids in case they're detained or deported, and communicate that plan. Children and their schools should know the names and contact information of people who can care for them if their parents can't. Parents may want to consult an attorney about temporary guardianship authorization. Lastly, it's important not to overlook the emotional well-being of kids who worry that their parents might be taken away. This activity book, designed to be used along with an adult, can help kids work through their fears. It's tragic that it even needs to exist, but it may provide some comfort.