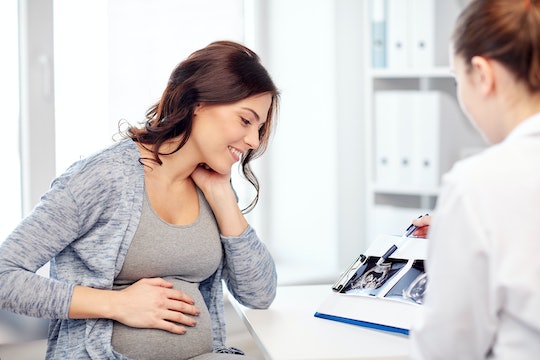 How To Talk To Your Doctor About An Elective C-Section, Because Your Choice Matters

There's more than one way to have a baby — don't let anyone tell you otherwise. Whether you are deep breathing in an inflatable pool or squeezing your partner's hands for dear life as an epidural is inserted in your back, you're bringing a human being into this world — and you're awesome. But what if you want to know how to talk to your doctor about an elective C-section?

"Personally, if a patient asks me for an elective cesarean, I first try to find out why she wants it," says Dr. Allison Hill, a board-certified OB-GYN and author of Your Pregnancy, Your Way. "The most common reason is fear of pain, followed by fear of tearing the vagina, fear of incontinence, and simply believing it’s not possible."

Hill tells Romper in an email interview that most of these fears stem from things other doctors have said to women before they were even pregnant. "They have been told things like, 'your pelvis is so small, 'your uterus is tipped,' and 'you are so tiny.'"

If you are considering an elective C-section, then it's important to approach your doctor with an educated request. Explain the "why" behind your thought process and be open with some of your reasons for wanting a C-section. Ask questions about recovery time, your ability to breastfeed after the procedure, and what future pregnancies might look like.

"Ultimately, I believe that every woman has the right to choose her birthing style," Hill says. "If she knows and understands the risks and makes an informed decision, whether it is to have a baby at home or to have an elective, scheduled cesarean, I will support her."

According to Baby Center, most experts estimate fewer than three in 100 women request a C-section for their first delivery. While the American College of Obstetricians and Gynecologists (ACOG) noted women should plan for vaginal birth whenever possible, the other end of the spectrum advocates that a woman’s body is just that — her body, her choice. Dr. Yvonne Bohn, OB-GYN at Providence Saint John’s Health Center in Santa Monica, California, says it's important to know what C-sections entail.

“The overall consensus is that the primary cesarean section rate is too high,” she says in an email interview with Romper. “The rate has been driven up by increasing number of inductions, larger babies, multiple gestations, older moms, and patient requests.”

A few stats according to The Bump: Moms who opted for elective C-sections were more than twice as likely to be re-hospitalized as moms who had vaginal birth or an unplanned C-section. The top reasons were complications from surgery and infection.

Dr. G. Thomas Ruiz, OB-GYN at Orange Coast Memorial Medical Center in Fountain Valley, California, tells Romper the most common reasons for a cesarean are that the baby is too big for the mother's pelvis (e.g. large baby, small maternal pelvis), fetal distress, a fetal butt first presentation (breech presentation), abnormal uterine bleeding in the third trimester, and repeat C-sections. Risks associated with the procedure include bleeding, infection, heavy blood loss, or even the need for a second operation. Some of the benefits include reduced or complete elimination of stress incontinence, uterine prolapse, and/or vaginal trauma.

Because the decision can be tricky, Bohn says it's important to find a doctor you trust. If you feel like you aren't getting the answers or support you need, then it might be time to switch doctors.

“This decision [for an elective C-section] needs to be made with the patient and her provider with the patient understanding the increased risks from surgery, as well as impact on future pregnancies and delivery," Bohn says. "Most obstetricians believe that when they recommend a cesarean section that it is for the well-being and health of the mother and baby in question."

And that's something anyone can get behind.