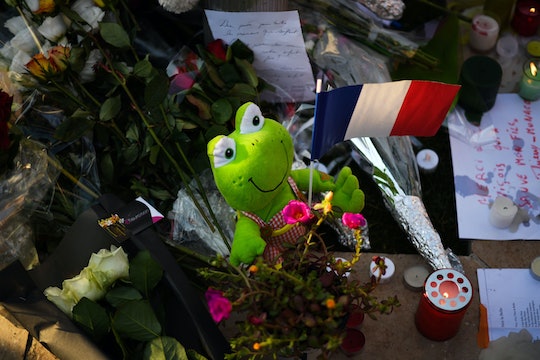 How To Talk To Your Kids About The Nice Attack, Because They'll Probably Have Questions

Lately, it’s felt like every new day has brought with it some kind of awful tragedy, another heartbreaking reminder of the darkness that exists in the world. On Thursday, at least 84 people were killed after a 31-year-old man drove a white panel truck directly into a crowd of people who had gathered to watch Bastille Day fireworks in Nice, France. The violent act was indiscriminate: locals and tourists, adults and children, and people from all different backgrounds were mowed down by the driver as he zig-zagged through the crowd. It’s the kind of thing that’s hard even for fully-grown adults to wrap their heads around, but if you have children, it can be even harder. So even though it’s not a conversation any parent really ever wants to have with their kids, if you’re wondering how to talk to your kids about the Nice attack, here are some suggestions.

As much as the idea of explaining yet another terror attack (in France, yet again) to your children seems painful, and like it could scare them, experts seem to agree that shielding kids from the truth it not the way to go. In fact, Gemma Allen, senior bereavement counsellor at UK charity Winston’s Wish, told The Telegraph that often times, children need the help of a parent to understand what it is they’ve been seeing and hearing, and taking the time to have an age-appropriate, yet honest conversation is one way that parents can help reassure children that they are safe, and to ease some of the fears and anxieties they have. As Allen explained to The Telegraph,

As the parent or teacher or carer, the most important part is to offer reassurance: [that events like this are] very unusual, [and that] there are lots of safety checks in place to protect us. Use age-appropriate language, and be aware of what your child understands: do they really know what ‘died’ means? It’s usually not until the age of 5 or 6 that children understand that death is permanent.

In the case of the Nice attack specifically, it can be even more challenging to reassure children that they are safe — after all, the attack was so shocking and unexpected, and there was little anyone could do to help themselves or their children in that moment. But parents can reinforce the idea that they are always trying to keep their children safe, and other people, like the police officers who were on the scene, as well as other people in the crowd, were there to help people out as much as possible.

Above all else, experts agree, after hearing about a tragic event, children are looking for reassurance that they are not in imminent danger. According to to Dr. Glenn Saxe, chairman of the department of child and adolescent psychiatry at NYU's Langone Medical Center, an important part of discussing traumatic events with your children is having the opportunity to reassure them and remind them that they are safe. Saxe told CNN,

The first kind of thought and feeling is [children will have is], 'Am I safe? Are people close to me safe? Will something happen? Will people I depend on protect me?'

Although you might not be able to say “everything is fine,” (because it obviously isn’t), you can let your child know that he or she is safe, that nothing is going to happen to them, and that you are there to protect them. But the words you use during the conversation, Allen noted, are as important as having the conversation in the first place — especially with younger children. For example, it might be easy to explain the Nice attack as being the work of a “bad man,” but that could lead to increased anxiety in young children, who might then assume that “bad men” are coming to hurt them, too.

Instead, Allen told The Telegraph, parents should explain that what the man did was wrong — that the behavior or action was wrong, not that he was inherently bad or evil. The same principle applies when discussing death. Word choice is really important when discussing death with young children, because as much as parents might want to soften the language, it can lead to confusion and ambiguity that can make kids stressed and scared. According to Allen,

For pre-school children, [parents should] use concrete language: don’t say ‘This person went to sleep’ or ‘We’ve lost that person,’ because that could instill fear or anxiety in that child about going to sleep. And what does lost mean? They’re lost at the shops? Be accurate and mindful of the impact of your language.

Beyond reassurance and basic details, American Academy of Pediatrics spokesperson Dr. David Schonfeld told CBS News that what you tell your children about Nice should be based upon their age and development:

Preschool children and younger children may see images on the news and worry that it's happening very nearby — the actual risk may be important with a younger child. Adults can clarify where France is, that it's very far away, that you have to take a plane to go there.

Above all, though, the consensus seems to be young children should be exposed to the news and any related media as little as possible. Caroline Knorr, of Common Sense Media, a non-profit organization that provides support and strategies for raising children in a “plugged in” world of media and technology, suggests that parents be especially vigilant about filtering the information that children have access to in the first place:

Turn off the TV and radio news at the top of the hour and half hour. Read the newspaper out of range of young eyes that can be frightened by the pictures (kids may respond strongly to pictures of other kids in jeopardy). Preschool kids don't need to see or hear about something that will only scare them silly, especially because they can easily confuse facts with fantasies or fears.

Older children, on the other hand, likely will have heard something, and might need a more concrete discussion. According to Knorr, children aged 7 and older might benefit more from leading the conversation, and from letting you know what they are aware of and what their thoughts are, instead of being told.

At this age, many kids will see the morality of events in stark black-and-white terms and are in the process of developing their moral beliefs. You may have to explain the basics of prejudice, bias, and civil and religious strife. But be careful about making generalizations, since kids will take what you say to the bank.

This might mean asking something like, “have you heard what’s been in the news recently?” or, perhaps more specifically, “do you know anything about what happened in France yesterday?” From there, your child can tell you, and then together you can fill in the gaps. But it’s also important to remember that every child reacts differently, and it might not be how you were expecting. According to TIME, Harold Koplewicz of the Child Mind Institute explained,

Director of Family Services at Winston's Wish, Sacha Richardson, says that, given the gravity of the attack, it's likely that children are going to be exposed to it in some way despite parents' best efforts — and when it happens, their reactions are important:

With all the media coverage surrounding this tragic incident, it is impossible to protect your children from learning about the deaths in Nice. Instead I would urge parents to be honest and up front with their children about what has happened.

Whilst the natural instinct for parents is to protect their children, it's important to have these conversations, which can be difficult and upsetting, to ensure that they understand these deaths, and also appreciate your honesty.

It seems, then, that whatever your child’s age, parents should always strive to be as empathetic and validating as possible. Tragic and scary events like the Nice attack can be extremely upsetting for children, and when trusted adults try to downplay those feelings (even if they are doing it because they are trying to be helpful), it can just leave children feeling more afraid, and also alone in their emotions. No adult can take away the child’s sadness or fear, but they can be a safe space, one where children can learn that bad things can happen in the world, and they can still be OK. As much as no parent ever wants to let their child know how sad and awful the world can be sometimes, we can help build their emotional strength, and know that the bad in the world doesn’t even sort of outweigh all that is good.