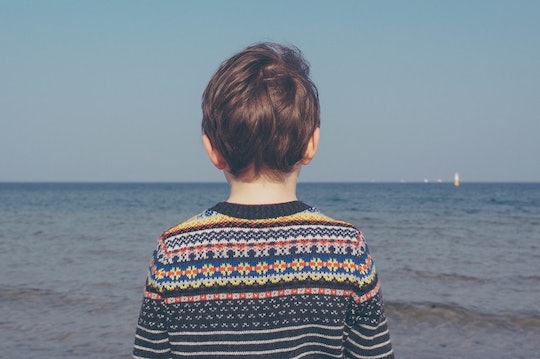 How To Talk To Your Kids About The Orlando Club Shooting

At least 50 people are dead and more than 53 are wounded after a lone gunman opened fire in an Orlando club early Sunday morning. The shooter, who been identified as Omar Sassiqui Mateen, targeted the LGBTQ community by attacking a popular gay nightclub called Pulse. Officials are investigating the incident as a terror attack. Although, unfortunately, mass shootings are not uncommon in America, this attack is the deadliest one in United States history. When terrible events like this happen, it can be a parents' instinct to shelter their child from the news. While this is natural, most kids will hear about the Orlando shooting regardless and they will most likely have questions could struggle with their emotions if left unaddressed. While there's no right or wrong way to address national tragedies with children, here are a few tips for talking to your kids about the Orlando club shooting.

It can be hard to wrap your head around the subject of mass shootings and terrorism, even as an adult it can near impossible to understand why someone could be so filled with hate that they would commit such a heinous act of violence against innocent people. Unfortunately, it increasingly looks like these tragedies are all a part of the world we currently live in. The fact is, these massacres happen so frequently that children will hear about them, no matter our efforts to shield them.

“Believe me, kids are thinking already about it,” psychiatrist Dr. Keith Ablow said in a previous interview with The Today Show. “They need an adult to coax them to express their feelings and to tell them they are safe and that we’re going to do the things we need to protect you.”

Dr. Alec Miller, a child psychologist at New York’s Montefiore Medical Center, backed up this finding on NBC News as well. “[Parents] want to encourage the kids to talk about what’s upsetting them about the situation, to get emotions off their chest," he said.

Harold Koplewicz, President of the Child Mind Institute, told Time last November, following the attacks in Paris, that the key to talking to your child about these incidents is honesty. He urged parents to not delay telling their children after something like this happens to stop them from listening to misinformation. “It's very likely that your child will hear about what happened, and it's best that it comes from you so that you are able to answer any questions, convey the facts, and set the emotional tone," he said.

The National Child Traumatic Stress Network released a set of guidelines to help parents talk to their kids after another recent shooting. “Let them know that they are welcome to ask questions and express their concerns and feeling,” the guide advises. “You should remain open to answering new questions and providing helpful information and support. You might not know all the answers and it is OK to say that.”

The best course it to ask your children what they’ve heard about the incident and answer any lingering questions they may have.

“By initiating this dialogue, and allowing and encouraging your children to express their feelings, you can help them build healthy coping skills that will serve them well in the future,” Koplewicz said.

Children take their emotional cues from their parents so it is important for you to try and stay calm during the conversation. If you are anxious, they will be too. Be mindful that “you don’t give [children] more details than they ask for.” You want your kids to be informed but you don’t want to scare them,” warns Koplewicz.

Also, try to avoid simply restating what they’ve heard on the news. “The more important thing to do is make time to discuss it,” Miller said. In that same vein, limit their exposure to the news as much as possible. It can be hard to tear your eyes away from 24-hour news channels after a tragedy like this (I myself am guilty of this) but it is important for you to turn the television off for the sake of your kids’ (and your) sanity.

You should also take cues from your knowledge of your own kids, their personality and ages. Koplewicz warns parents that children under five can confuse the facts of the event with fear. In fact, he suggests parents avoid the subject as much as they can with kids this age. Parenting expert Deborah Gilboa suggests parents of pre-school-aged kids should stick to a one-sentence story version of the events. Keep it simple: A bad man hurt people.

Elementary school children have a greater understanding of the world—and of violence—which means their fears and anxiety about the event could increase. Parents should try to shield them from much of the more graphic details while still making sure you answer their questions. Sometimes, facts can be comforting to children (and even adults). “For kids this age,” Koplewicz said, “knowledge can be empowering and helps relieve anxiety.”

Don’t dismiss your child’s fears as foolish or irrational, although it is important to point out that these attacks are rare and unlikely to happen. Still, their anxiety is totally natural because children are narcissists especially at this age (any parent knows this), they can think that they are going to come into contact with the things they hear about.

“Let your children know that they are safe and loved,” advised psychologist Paul Coleman, author of Finding Peace When Your Heart is in Pieces.

Gilboa suggests parents try to find some of the positive stories beneath all the negative details. The stories about the heroes who saved lives amidst the tragedy. The kind of stories we all like to hear.

Like that Mister Rogers quote: “When I was a boy and I would see scary things in the news, my mother would say to me, 'Look for the helpers. You will always find people who are helping.'” Be Mister Rogers' mother.

With tweens and teenagers, it can be important to not only talk about their feelings but also about some of their solutions to these tragedies. Adolescents this age can find solace in problem-solving and, according to Gilboa, teenagers expect more than just an airing of feelings. “Teenagers are looking for hypocrisy and solutions and this generation believes in collaboration and social justice. And they are going to ask ‘What are you doing,’ she said. “You can answer and then ask ‘what are you doing? What would you like to do? What can we do together?”

“I think for anyone action makes us feel effective,” Gilboa added. “What we want out kids to do when [they] see something wrong is to try to fix it.” This is what you should discuss with your high schooler.

“At the same time,” the NCTSN says, “don’t push them to talk if they don’t want to.” Every kid process disturbing events differently, just like adults, so don’t panic if they seem indifferent to the whole thing. While you should let them know you are available to talk whenever they want, you shouldn’t force them.

To get a little personal, I was 10 when the September 11 attacks occurred. I recently asked my mom what my response was to the terrorist attacks at that age (because I couldn’t remember anything except we spent all of our classes talking about them for the entire week and there was nothing on the Disney Channel). According to her, I withdrew. I didn’t want to talk about it, would walk away when it was being discussed in our home or when the footage was on television. On the other hand, my mom talked about the attacks a lot with my older sister, who was 15 at the time. Now, that could have been an age thing or it could have been a personality thing. The important thing to note is that my mom treated us as two different people and took her cues about discussing September 11 from our personalities.

Obviously, broaching such a complicated, sad, and convoluted subject like mass shootings with your child is difficult but there are ways to go about it that give your child a sense of control that they may feel has been taken from them in the wake of the tragedy. Parents should try to be open and honest with their children, giving them an outlet to ask questions, get answers, and give voice to their emotions, while confirming their safety.