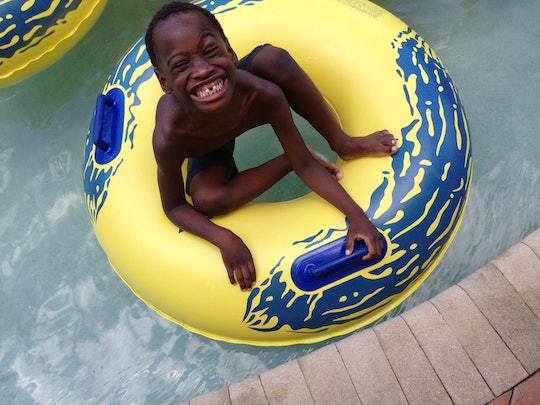 I hit the summer jackpot with my first kid: He is an absolute fish. Even as a toddler, his love of water knew no bounds. He was never scared to put his head under, never scared to let go of our hands, and he was a natural swimmer doing flips in the pool at age 3. I never really taught him to swim — he just did. But his younger brother is a different story, so although this ain't my first rodeo, I'm having to learn how to teach a kid to swim underwater for the first time. And not just any kid; a strong willed 4-year-old who would rather go to college in his floaties than ever part with them. So I have my work cut out for me.

British Swim School CEO Rita Goldberg notes there is a difference between learning to swim and learning to survive in the water, a representative tells Romper. Children aged 3 and younger (and even many 4-year-olds) won't be ready to learn the mechanics of true swimming strokes, but they can and should be taught to survive in the water. In their survival curriculum, the British Swim School concentrates on water acclimation, back floating, and reaching a safe place.

Since your child feels safest with you, it only makes sense that he would want you beside him as he learns this intimidating new skill. The British Swim School has found that young children often learn best initially with a parent beside them in the water, so leaving lessons solely to the professionals isn't necessarily the best idea anyway. With parents at their side, toddlers can get acclimated to the water and learn to float on their backs to reach a point of safety.

You might think learning to tread water would be the most important swimming skill a child should master, but the truth is, its a stressful and quickly exhausting exercise. In a moment of crisis, they have a much better chance of survival if they know how to stay calm and simply float.

Liz Schmidt, the Community Water Safety Director for the YMCA of South Palm Beach County, agrees with Goldberg that modern swim lessons have changed. "We traditionally focused on stroke development, but now it’s about getting the swimmer to safety," Schmidt recently told The Sun-Sentinel. "Research shows that most drownings occur within 6 to 10 feet of safety. So, it’s safety first, then sessions on stroke development."

But before teaching a child to float, you have to help her get comfortable in the water. Former Red Cross Water Safety Instructor Stacy Caprio tells Romper that in order to effectively teach a child to swim without tears, you have to make it enjoyable. "The best lesson I learned from teaching young children is you have to make it fun and engaging — a game — for them to be willing to give it a try and eventually learn, especially when they are scared."

Need help picturing it? Caprio says one popular game among her clients was talking to a fish named Bob. "I would tell kids afraid of putting their noses in the water that there was a friendly fish named Bob underwater, and if they blew out of their nose in the water they would be saying hi to him and he would say hi back," she remembers fondly. "They loved it and they would even say hi to him as they left and tell their parents."

No matter how much you want your child to learn to swim, it's important that you stay nonchalant about it, lest your stress and fear be compounded with their own. Stay relaxed and silly, and focus on helping them simply feel comfortable in the water. Remember, the ultimate goal is for them to calmly back float to safety in a crisis, not become an Olympic prodigy. The more comfortable they become, the stronger a swimmer they will be.