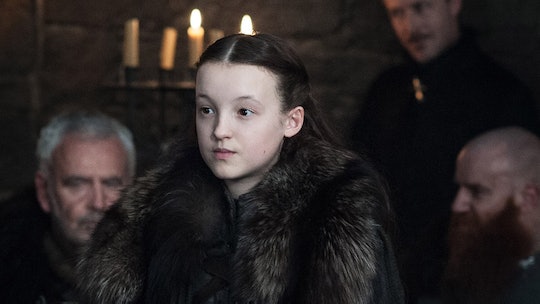 When Lyanna Mormont was thrown aside by a force greater than her, she had two choices: cower and hide, or run back into the fray and wield the weapons she was born to. She could eschew her own voice or scream out a battle cry laced with the power imbued in the fabric of her making from the generations of women who went before her. It is my wish that our own girls will find similar courage, that when they face impossible odds, they rally. We must learn how to teach girls to be brave in front of undead giants, for surely there are worse monsters afoot outside of the land of Westeros.

I realize that outside of the fictional Seven Kingdoms that there is no Night King, there is no battle being waged against an army of the undead, but there are other terrors outside of the dark night of Winterfell. There will be bullies who think they can pick on our girls just because she wants to wear a princess dress. We must teach them that princesses have power as well. That they can be queen of the kingdom, empress in their own right. There are people in power who would see their rights revoked and their own bodily autonomy given to the state, but we must teach them that they can fight back, and that justice can prevail. And that even though the battle they face might seem un-winnable, that even an army of the dead won't keep girls down.

The undead giants our girls face might not stand sentry with a mace made of human remains, with their bones and viscera on display. They might not tread through the winter that has been approaching for years, the bogeyman of Starkian nightmares. No, the undead giants our girls will face are the resurrected anti-feminist rhetoric that simply won't die, no matter how many times we stab it through the eye with dragon glass or Valyrian steel. Our wight giants are the beliefs that women are nothing more than factories of reproduction that slow the workforce with all their demands for equality.

The snow that crunched beneath the boot heels of Lyanna Mormont echoes the blast of sound that will reverberate beneath the soles of our girls as they kick their way through the glass ceiling. Their style might not be made of iron as Lyanna's or leather as Sansa's, but it will be theirs, and they'll get to choose their armor regardless of how it might affect, entice, or influence those around her.

As we navigate parenting, and learn how to teach girls to be brave in front of undead giants and other horrors, we must examine what it means to be brave. We need our girls to understand that bravery is progress not perfection. That the scars we bear from surviving are as important as battle we fought, and how we display them is our choice.

Our opponents, much like wight giants, are large, looming, and they just keep coming back. For every wight we slay, some evil force returns to us 10 more. Our girls will likely fight many of the same giants we battle today, just as we are battling the undead foes that battled our mothers, and our mothers' mothers. The difference is the field on which we find ourselves. It is one of our own making. If the wights want to fight, we'll fight, but they'll do it on our turf. The rules have changed because we've changed them. Our girls will be an even greater force than us, than our mothers. And maybe this time, the Night King doesn't win.