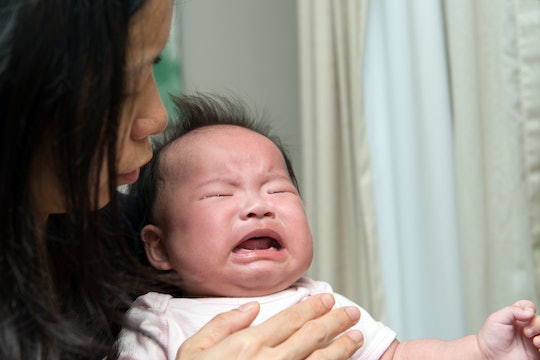 Here's How To Tell If Your Baby's Fussiness Is Gas-Related

When you're the parent of a new little babe, one of your most confusing tasks is trying to figure out why the heck your baby is crying. Since babies have no way of actually telling us what's bothering them, it often takes a process of elimination to figure it out. Are they hungry? Sleepy? Gassy? Just plain fussy? While it's likely you'll start to learn their cues after a bit, sometimes, there's really no telling why they're crying, but the gas issue is a common one. Knowing the how to tell if your baby has gas can help you at least rule out one issue.

So, how exactly can you tell if your baby has gas? According to Dr. Tyree Winters, pediatrician and Associate Program Director of Pediatric Residency at Goryeb Children’s Hospital in New Jersey, "Flatus, or gas, can have a variety of physical signs. Some common signs include excessive fussiness, abdominal bloating, reflux, or straining without bowel movements." Though fussiness in babies is fairly typical, if your little one seems really out of sorts, or keeps squirming and pulling up her legs, she may have some gas that refuses to pass.

There are a number of ways to help relieve gas in babies though. If you're not sure whether or your not your baby is actually troubled by gas, trying some of these tricks can help you determine what's going on. If your little one seems at peace soon after, the cause of the fuss was likely gas.

"You can help your baby relieve gas by laying them on their abdomen for supervised tummy time, moving their legs in a bicycle motion while they are laying on their back, or gently massaging their abdomen," Winters tells Romper. "Parents can also prevent gas by burping their child every 1 to 2 ounces during feeds and keeping the baby upright for at least 15 to 20 minutes after feedings," he adds. Doing these things can help to break up bubbles and give gas a little push towards an exit.

New York pediatrician Dr. Deena Blanchard tells Romper, "Many babies have sensitive tummies so gassiness is typically a challenge that babies will have to outgrow." Along with bicycling your baby's legs, white noise, rocking your little one, frequent burping, and probiotics all can help to relieve gas, Blanchard mentions.

Because infants eat around the clock, their digestive systems are working around the clock as well. Things are bound to get a little backed up now and then. But don't fret — frequent gassiness in babies is usually short-lived. "Usually around six months of age, babies start to self-burp when they are sitting up. They also do not swallow as much air, so may not even need to burp as much," pediatrician Dr. Alison Mitzner, MD, tells Romper.

Gassiness, of course, depends on your particular baby. "Breastfed babies sometimes don’t need as much burping as formula fed babies, and some babies with reflux may need more frequent burping during feeds," notes Mitzner. "You will learn your baby and what is necessary and best for your baby."

If your baby doesn't seem to be eased by any of these methods, talk to your pediatrician. They may suggest some gas drops, or take a deeper look to make sure something like a food intolerance isn't to blame. More than likely, your baby is just experiencing a typical amount of gas and they will outgrow it as their systems and bodies grow and develop. After all, if you were super teeny and all of your organs were squished together, you'd likely have a decent amount of gas, too, right?