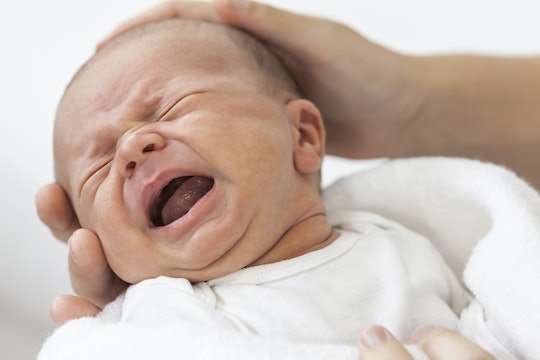 How To Tell If Your Baby Is On A Nursing Strike

Breastfeeding is tricky enough as it is. But when your baby decides to go on a nursing strike, it's virtually impossible. Although the thought of your child protesting anything may sound cute and slightly humorous, a nursing strike is actually a sign that something is wrong and your baby is trying to let you know the only way they know how. Learning how to tell if your baby is on a nursing strike will eliminate any doubts about what is going on and help you get to the root of the issue as soon as you can.

According to Baby Center, there's really only one sign of a nursing strike: refusal to breastfeed. If your baby generally nurses well and isn't in the process of weaning, their sudden refusal to stop nursing can be very worrisome. Luckily, there are a few common problems that cause babies to not want to nurse and once you identify the problem, it's only a matter of helping it go away.

The Mayo Clinic stated that the most common causes of a nursing strike are pain from teething, thrush, a sore throat or stuffy nose, overstimulation, low milk supply, or odd tastes in the milk.

If you suspect that your baby is on a nursing strike, first try to identify the cause. Then, the Mayo Clinic suggested that mothers be especially persistent in offering the breast, making sure to minimize distractions (ruling out overstimulation), switch up positions, and deal with any other symptoms your baby is displaying, like a runny nose or a fever.

Nursing strikes usually last up to five days, and patience, persistence and pumping to keep up your supply will help you both survive the challenge. Breastfeeding Basics also encouraged mothers never to blame themselves for a baby's nursing strike, as it's hardly ever something you've done wrong.