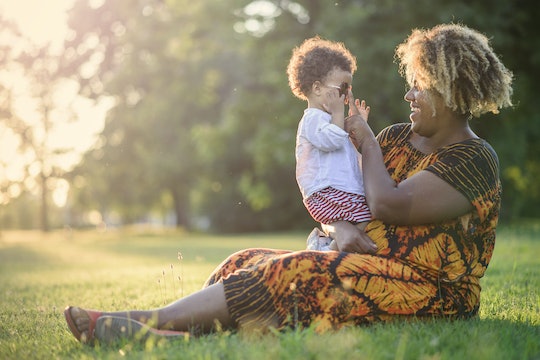 Turns Out, You Can Start Signing With Your Baby Earlier Than You Think

Being a deaf mom, I get a lot of questions from hearing parents about teaching their kids how to sign, and unfortunately, I don't have all the answers handy because I was raised in an oralist home with hearing parents and siblings. When it comes to parenting, there are a lot of answers I don't have, but thankfully, I know who to ask. When it comes to queries like knowing how to tell if your baby is ready to sign, there are a range of opinions on the subject, and they're vastly different between the d/Deaf community and the hearing population.

In the d/Deaf community, signing is just like regular language because it is regular language. You start signing to your baby the day they're born, just as you would start talking to your baby. In the hearing community, advocates for the use of sign language generally advise you start signing with your children when they're around 7 months old, as Sign2Me.com suggests. Unfortunately, there has been a dearth of research evaluating native sign language speakers and their hearing and deaf children and the development of their language skills. But studies suggest that learning sign language beginning between 6 and 8 months can lead to better language cognition than only using one method of communication.

When I had my first child, I began signing with him as soon as I began speaking with him. He picked up my meaning pretty quickly, and started signing for "more" at about 7 or 8 months when he really wanted more of that avocado goodness. He also signed for "milk" and "cookie" because he was no fool. However, when he wasn't clapping on time, waving, or pointing to what he wanted, we were discouraged to continue signing by our pediatrician. They worried because he was showing signs of autism, he wouldn't continue to develop oral skills because he'd rely instead on sign.

As a terrified parent, I complied, and I'll admit, I regret it. Thankfully, no one is recommending this course of action nine years later. In fact, there are studies that suggest that signing with kids can actually improve cognition for kids with delays, according to the Journal of Deaf Studies and Deaf Education. It didn't take long for my son to stop signing, but his speech still didn't appear for months later. Once he began official speech therapy at 18 months old, he was no longer signing at all and had no desire to sign, either. As the mother of an autistic child, I have many "what if" questions that rattle in my head, none quite so big as this one.

I spoke with Deaf educator and developmental specialist Dr. Frank Harris PhD, and asked him how to tell if your baby is ready to sign. He says, "You'll know they're ready to sign when they start signing back to you, but they're always ready to watch you sign. Start as soon as they're born." He notes that baby's focus and line of vision is pretty much crap, and they'll probably respond more to your voice at that point, but to do it closely, and make big facial expressions.

In sign language, these expressions are called "non-manual markers." While speaking and hearing parents might also be saying the words, they should also include big expressions to go along with them. "Babies love big gestures and big expressions. It helps them connect meaning to the sign and to the word," says Harris.

Almost all the programs for hearing parents designed to teach sign begin at age 6 months, but Harris says this is primarily because that's about when babies sit up and have some gross motor control, allowing them to mimic the moves, but he's seen babies start the preliminary movements about the same time cooing and babbling begins, or when babies start mouthing their fists and feet. "Babies are sponges. As soon as you learn some signs, you can sign it to them. Don't worry about a perfect time to sign." It's a language much like any other. If you speak two languages in your home, you expose your children to them at the same time. It's exactly the same for bimodal bilingual children — those who speak a language and sign a language. It begins when you begin. They take it in and understand what it means before they can show you fully they understand.

For instance, if you make the sign for "more" when you're blowing bubbles on your baby's tummy who's just learned to enjoy the sensation, and you sign and say "more" and blow again, eliciting another round of giggles, you can see they're getting it when they light up at the sign before you even start the process again.

There are good programs everywhere, and it's really easy to learn the basics. It can also be really handy (pun intended) when they can communicate with you before they can speak with you. Have fun with it, and your child will as well.