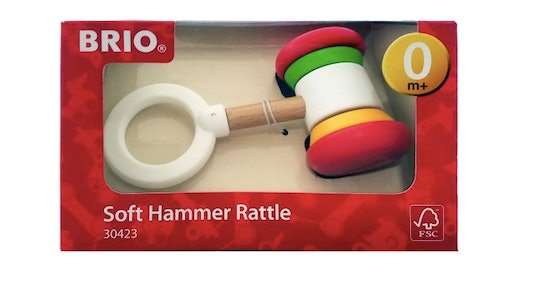 BRIO Is Recalling Nearly 1,500 Baby Rattles Due To A Choking Hazard

Babies love their rattles, and parents love the distraction those rattles provide. But there's a bit of bad news if your baby has been obsessed with a BRIO soft hammer rattle. Earlier this month, the company issued a recall for the toy after several reports led to the discovery of a choking hazard on a batch of rattles. So, before you toss everything in your little's toy chest, here's how to tell if your baby's BRIO rattle was recalled, because you don't want to take any chances.

BRIO did not immediately respond to Romper's request for comment, but the company did issue the recall voluntarily, working with the U.S. Consumer Product Safety Commission to do a "fast track recall" for maximum safety.

The Swedish manufacturer, known for creating simple toys meant to spark children's imaginations, issued the recall on soft hammer rattles after receiving seven reports of the wooden rings on the hammer part of the toy cracking. Luckily, there were no injuries reported.

On the BRIO website, the company explained how to tell if your rattle could be one of the ones affected. After all, while you don't want to take any chances, you probably also don't want to go through all the hassle of taking away your baby's favorite toy and provoking the inevitable screaming fit if it turns out that your rattle is totally fine. So, the company described the toys as such:

They have a wooden handle with a white plastic teething ring at one end and a red, yellow, white and green hammer head at the other end. BRIO is stamped on the hammer head. The rattle measures about 5 inches long.

If parents are still unsure about whether their baby's toy is safe, the rattles in question were sold at retailers like HomeGoods, Kidding Around, and Nordstrom, as well as online retailers like Amazon, from March 2015 through June 2017. They cost about $13, and there were about 1,500 units sold, according to the recall notice.

Customers with the product in question can contact BRIO to receive either a full refund, or a replacement toy of similar value. They can reach the company by calling 800-886-1236 Monday through Friday from 8:30 a.m. to 5 p.m. Eastern Time.

While recalls are usually cause for concern, if you've seen BRIO in headlines recently it was for a good reason. Last year, the company initiated efforts to get rid of gender stereotypes in toys for young kids. And, if it turns out that your baby's rattle was included in the recall, BRIO has plenty of other cool rattles from which to choose, so your baby can safely entertain themselves while parents breathe a sigh of relief.