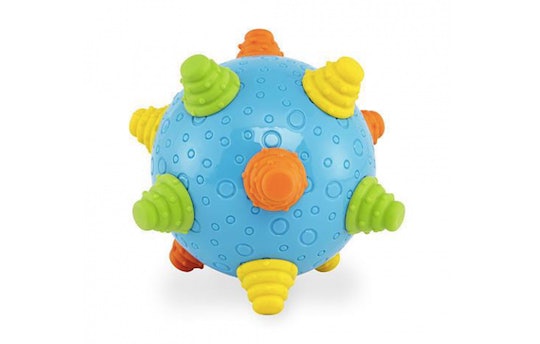 Toys "R" Us Is Recalling 30,000 Of These Baby 'Giggle Balls' Due To A Choking Hazard

Choking is at the top of the list of concerns for many parents of young children. Given the natural pre-disposition to put any and everything into their mouths, babies do provide parents with cause for concern. That concern is amplified when toys malfunction. And with a new recall for an infant toy posing this specific risk, here's how to tell if your baby's "giggle ball" from Toys "R" Us was recalled. Romper has reached out to Toys "R" Us for comment regarding the reported recall and is awaiting a response.

As of Thursday, Oct. 5, Toys "R" Us will be recalling nearly 30,000 of the infant toys. The specific toy being recalled is the "Bruin Infant Wiggle Ball," which is also often referred to as a "giggle ball." As of Thursday, there have been six reports of rubber knobs on the toy breaking off, four of which involved pieces of the toy being found in a child's mouth, according to CNBC. It has also been discovered that the plastic backs of the toys can detach and pose a choking hazard as well. At the time of publishing, no deaths have been reported as a result of this product, CNBC reported.

Toys "R" Us and Babies "R" Us stores across the United States sold these toys from June 2016 to January 2017 for roughly $13. A reported 3,000 of the toys were also sold in Canadian stores. According to CNBC, they were manufactured in China, and have the production model number "5F6342E" printed on them. If these details line up with your own giggle ball, it is included in the recall.

The Consumer Product Safety Commission has recommended that shoppers stop using the recalled balls immediately and return them to Toys "R" Us or Babies "R" Us stores for a full refund. Toys "R" Us can be reached via telephone at 800-869-7787 from 9 a.m. to 5 p.m. Eastern Time, Monday through Friday, or online at www.toysrus.com. On the website, the specific information on this product can be found under Product Recalls.

Toys often pose choking hazards for young children. While the Centers for Disease Control and Prevention (CDC) reports food products — most commonly nuts, hot dogs, and pieces of fruits and vegetables — as the leading cause of nonlethal choking incidents, most choking deaths in children age 3 and younger are caused by toys or other child products. Because of this risk, parents must be vigilant in their monitoring of toys and other household items, as well as keeping an eye on any recalls of child products that could pose a risk. According to Parents, "Close supervision, savvy, and organization is critical in preventing tragic incidents of choking."

According to the Mayo Clinic, babies are at a unique risk of choking because they have yet to master the specifics of chewing and swallowing their food, and may be incapable of coughing with enough force for remove any obstructions to their airways. There are also some health conditions in children that can potentially increase their risk of choking.

Aside from close monitoring, there is one other important step that parents can take to reduce their babies' risk of serious choking incidents: learning infant CPR and first aid. Taking a professional course on these methods is the best way to learn proper technique. Classes can usually be found through your local Red Cross.

As scary as product recalls and choking hazards can be for parents, there are a lot of ways to empower yourself to be prepared. Tossing or returning those recalled giggle balls is an important fist step towards safety.