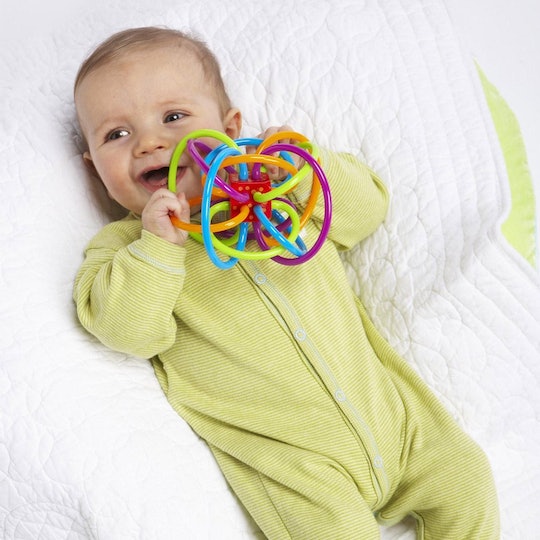 How To Tell If Your Baby's Teething Toy Was Recalled

Teething toys are part of every mom’s arsenal of parenting supplies. They keep their little one’s mouth busy and comfortable during those painful months. But, parents will want to be extra mindful about which toy they give their baby after more than 15,000 Winkel Colorburst teething and activity toys were pulled from store shelves following complaints from consumers that plastic bits of the toy broke off, posing a choking hazard to infants with incoming teeth. But before you toss out every chewing device in sight, here’s how to tell if your baby’s teething toy was recalled and what to do if it was.

Romper has reached out to The Manhattan Toy Company — the toy’s manufacturer based in Minnesota — for comment regarding the recent recall and is awaiting a response.

According to the U.S. Consumer Product Safety Commission, the Winkel Colorburst teething and activity toys included in the recall were sold for about $15 at toy stores nationwide and online — including large retailers like Target, Walmart, Amazon, and buybuy Baby — between May 2015 and September 2016.

A safety notice issued by the company noted that the following "lot codes" were included in the recall:

If you have a Winkel Colorburst teething and activity toy at home — which have multi-color plastic tubing connected to a pattered cube with rattle beads inside — you can find the "lot code" on the center cube of the toy or on the packaging, according to the The Manhattan Toy Company's recall notice.

Should you find your baby's teething toy is included in the recall, the company advises parents to stop using it immediately and return it to the store where it was purchased for a full refund. If you have any further questions regarding the recall, you can also call the company at 800-541-1345 or head over to its website.

The CPSC and the company issued the recall earlier this week on Thursday, July 20, writing: The colored plastic tubes on the product can become brittle and break into small pieces, posing a choking hazard to infants." The agency added that it had received four reports of plastic tubes breaking and there have been no injuries attributed to this issue to date.

Recalls are always a bit alarming, but especially so if the product in question could potentially impact your little's one safety. Fortunately, the problem was addressed quickly enough and parents now know what to do to ensure their baby's teething device is free of defects.

More Like This
Chrissy Teigen Revealed Her New Baby Girl's Unique Name With A Precious Family Photo
How To Celebrate Baby’s First Valentine’s Day, From Gifts To ’Fits
Marie Kondo Gives Up Tidying Post-Kids, Sparking Joy For Moms Everywhere
10 Great Podcasts That Will Keep Your Kids Entertained On Your Next Family Road Trip
What Parents Are Talking About — Delivered Straight To Your Inbox