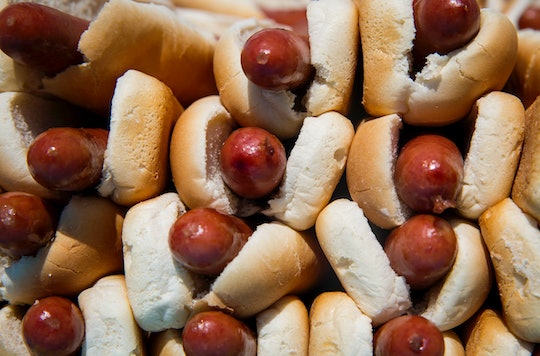 2016 continues to be the Year of the Food Recall, as yet another major food manufacturer has announced a recall of its product due to listeria contamination concerns. This time, it's Bar-S — the maker of over 120 meat products sold in all 50 U.S. states. If you head to the Bar-S website, Facebook, or Twitter accounts, you'll find the company woefully lacking in information — as in none as of press time — about which specific products are part of the Bar-S recall. Here's how to tell if your Bar-S hot dogs and corn dogs have been recalled.

On Tuesday, the U.S. Department of Agriculture Food Safety and Inspection Service released the Bar-S recall announcement on its website. The recall states that a staggering 186 tons of product — that include hot dogs and corn dogs made with both chicken and pork — are affected by the recall. That's a LOT of hot dogs and corn dogs. (Somewhere, a Nathan's Hot Dog Eating Contest champion weeps.)

So far, there have been no reports of illnesses or adverse reactions; Bar-S has issued the recall out of an abundance of caution. As devastatingly costly as a recall of this size must be to Bar-S, it's certainly cheaper than a wrongful death lawsuit, as listeria carries serious health risks to pregnant women and their unborn children. Here are the five Bar-S brand hot dog and corn dog products affected by the recall.

Every Bar-S product affected by the recall has establishment number "EST. P-81A" printed within the USDA mark of inspection, and the affected products were shipped to every state in the country. While stores will pull any recalled products from shelves, consumers should check their fridges and freezers to see if they have any of the recalled Bar-S hot dogs and corn dogs at home.

If you discover that you have any of the recalled Bar-S products at home, consumers are encouraged to either dispose of them or return them to the place they purchased. At this time, Bar-S has made no other comment about customer refunds.