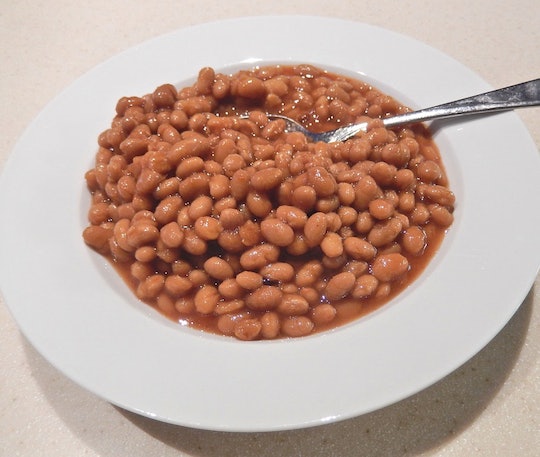 How To Tell If Your Cans Of Baked Beans Were Recalled

With summer in full gear, backyard barbecues and meals around the campfire are aplenty. But, as the result of a recent recall, you’ll want to be extra careful before you open a can of baked beans after a popular brand was pulled from store shelves. Following an internal quality assurance check, Bush Brothers & Co. announced a voluntary recall of various types of baked beans on Saturday due to “potentially defective side seams on the cans,” according to a press release. While no illnesses have been reported thus far, any comprised can should be tossed immediately. But before you fill up your trash can, here’s how to tell if your Bush’s baked beans were recalled and what to do if they were.

Romper has reached out to Bush Brothers & Co. regarding the recall and is awaiting a response. The company did, however, issue an announcement on its website on Saturday:

This recall was initiated after our internal quality assurance checks identified the issue. Subsequent investigations indicated a temporary quality issue from one of our can suppliers. The problem was corrected and no other product is affected. As a fourth generation family owned business, we are guided by our values of integrity, caring,responsibility, and trust and we apologize for any inconvenience or concern this situation may cause.

According to the company, all the affected products are 28-ounce cans with a best-by date of June 2019 and include the following variations:

The lot codes and best-by dates can be found on the the bottom of the can. You can also see visuals of each affected product here.

Bush Brothers & Co. also said over the weekend that while "no illnesses or other adverse consequences have been reported in connection with this voluntary recall," anyone who has an affected can of baked beans should dispose of it immediately — even if the beans do not look or smell spoiled.

The company's press release didn't address whether it plans to issue refunds to those who have an affected product. But if you have any questions about the recall, feel free to contact consumer relations at 1-800-590-3797, Monday through Friday between 8 a.m. and 5 p.m. Eastern Time.

Food recalls are always a little troubling. So, to make sure you and your family are safe at your next cookout, double-check your cupboards and look carefully at the labels on your baked beans. And toss anything that could possibly make you and your little ones ill.

More Like This
6-Year-Old Boy Has Zero Regrets After Ordering $1,000 Worth Of Food On Grubhub
Eagles Coach Nick Sirianni Brought His Kids To A Press Conference & It Was Hilarious
The Best TV Shows For 5-Year-Olds
The Sweetest Things Paul Rudd Has Said About Being A Dad
What Parents Are Talking About — Delivered Straight To Your Inbox