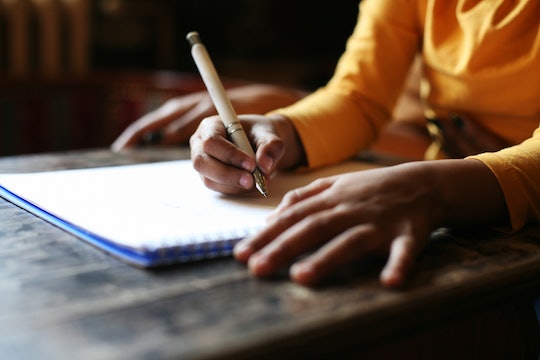 When I was in kindergarten, I realized that I learned differently than other children. My innate hyperactivity made it impossible for me to calmly do my work as I constantly struggled with the inability to begin a project or task. But I could remember facts that were said aloud, and memorize how they happened and in what order, without consciously doing so. This led many people to question whether or not I had some level of photographic memory. Since the '90s, science has learned a lot about recall, and how to tell if your child has a photographic memory.

More Like This
Parents Are Vaccinated, But Still Nervous About Their Kids Getting The Shot
Why Does My Kid Keep Getting Lice?
Signs Of Anxiety In Kids & Teens, According to Experts
Will Summer Camps Happen In 2021?

Alas, photographic memories do not exist in the way that has been sensationalized by films like 1988's Rainman. The hypothesis of photographic memory, according to memory researchers Synap, is that a person could be presented with some material, and after a short exposure to that material, that person would be able to recall its likeness perfectly without assistance from others or using some sort of cognitive maneuver like a pneumonic device. There is a paucity of evidence that this could ever happen, outside of one woman named Elizabeth who was studied once by Charles Stromeyer III in the 1970s, and for whom the evidence is at best quite sketchy, because she married the researcher at the end of the study.

However, there are other types of phenomena that exist that are similar to photographic memory that boast an incredible ability to recall information. The most referenced type of extraordinary memory is "eidetic memory" or the ability to vividly recall images after only seeing them momentarily, according to Cognitive, Conative and Behavioral Neurology. Children are more likely to exhibit characteristics of this memory syndrome than adults. As per the research, there is no way to tell if your child has a photographic memory, but can you discern if your child has another memory syndrome?

In my case, I didn't learn until my first general psych course in college that my memory was anything special. I knew it was different, and that I intuited things differently from others, but I did not understand the extent of my abilities or the level of my differences. It was in that class that I would be given a series of tests and it would be determined that I have an eidetic memory and two separate forms of synesthesia — another type of memory syndrome. In my case, I can not only recall what it is that I see, but also catalogue when I saw it, where I was, and where it is in relation to other memories that I have. If what I see has an aural element, like a soundtrack or series of beeps, I will remember how those sounds feel, and it enhances each memory.

My mother does not recall when she first realized that my memory was so good, but to this day will call me randomly in the middle of the day to ask about something that happened, or some show we watched 25 years ago. This lack of awareness is fairly normal, according to research published in The Lancet. Because while memory is certainly helpful for tests that require only recall, it does not help your child learn or interpret data, merely to recall it. Sure, I can memorize hundreds of places of Pi (something I did for extra credit in eighth grade), but I can't use those numbers to solve a math problem, because I suck at math.

The journal European Neurology reported that the only way to truly determine memory is through testing, otherwise you're just observing that your child has phenomenal or above average recall. Teachers would often lament to my parents that "she knows the material" but that my hyperactivity would keep me from doing anything with it other than rote responses. If you're hearing similar things from your children's teachers, or if you notice that your child can draw their entire day from memory, it might be fun to have it tested. But in the end, it's not that big of a deal unless they really learn to harness it, and learn from the material that they're memorizing. Until then, it's just stored data with no purpose.