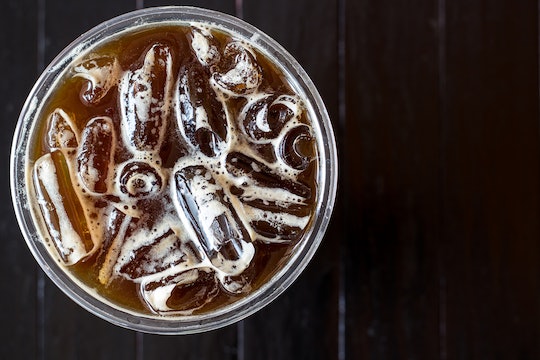 This Cold Brew Has Been Recalled Due To Potentially Deadly Toxins

Death Wish Coffee, the company that boasts the "world's strongest coffee," recently issued a mass recall of its canned cold brew coffee. The reason behind the recall is a reported error in production that led to a potentially lethal risk for its consumers. Fortunately, not all of the coffee was impacted. So, here's how to tell if your cold brew coffee was recalled and what the associated dangers are.

The cold brew coffee in question, according to the Food and Drug Administration, is the 11-ounce nitro cold brew cans. Following a review of production by Cornell University, the FDA reported that the coffee in these cans was processed in such a way that “could lead to the growth and production of the deadly toxin, botulin.”

According to CNN, botulin is a paralyzing nerve toxin that grows in low oxygen and low acid environments, such as soil and deep wounds, or as in this case, cans. This toxin causes botulism in humans, which is a particularly potent and potentially deadly form of food poisoning that paralyzes human muscles. According to the FDA, early warning signs of the illness include “general weakness, dizziness, double-vision and trouble with speaking or swallowing... [and] difficulty breathing.”

Other symptoms listed by CNN include drooping eyelids, blurred vision, dry mouth, and slurred speech. When left untreated this condition can cause greater paralysis of the muscles of the arms, legs, and trunk of the body which make it impossible to breathe. Anyone experiencing these symptoms should seek medical help immediately.

The founder and owner of Death Wish Coffee Co., Mike Brown, said in a press release, which was published on the company's website, that the recall is completely proactive at this point:

Our customers’ safety is of paramount importance and Death Wish Coffee is taking this significant, proactive step to ensure that the highest quality, safest, and of course, strongest coffee products we produce are of industry-exceeding standards. Thus we are taking this measure of recalling all Death Wish Nitro Cold Brew cans from shelves. We apologize for the inconvenience this may cause our customers and our retail partners, but we believe this is the right precautionary measure to take.

The release also states that any customers who purchased the product on the company's website are guaranteed a refund within 60 days of the recall announcement. Along with online stores, these cans were also reportedly available at some independent retailers and grocery stores, mostly on the East Coast. Anyone who bought the canned cold brew from such locations can also receive a refund after providing proof of purchase. Brown told Romper that the refund will come in the form of a check in the mail.

The FDA reported that Death Wish Coffee Co., which is based in Round Lake, New York, "is halting production of Nitro Cold Brew until an additional step in the manufacturing process is implemented." All Death Wish Nitro cans have been removed from the company’s online store pending this change in production. They have also been pulled from the shelves of Price Chopper/Market 32, Healthy Living Market & Café, and other various independent retailers at the request of Death Wish Coffee.

Brown emphasized that no C. botulinum was found in 14 weeks of testing, the recall is merely a precaution. He also told Romper that the recall is part of an effort to maintain the highest of standards for Death Wish Coffee:

Customer safety is our number one value and we’re committed to being a pioneer in the coffee space in all aspects, especially safety.

Fortunately, it would appear that the issue was caught in time. The FDA has reported no deaths or illnesses related to potential contamination of the cans at this time. And moving forward, Death Wish Coffee is asking all consumers with unopened Nitro cans to return them to the location of purchase or dispose of them immediately.

The company's name combined with the actual death risk has prompted many people to point out the irony of the situation on social media. Some are saying that the company is living up to its name, while others are laughing at the "thrill" of drinking contaminated coffee. While I'm all for a good laugh, please don't be a thrill seeker and just go to Starbucks for the time being.