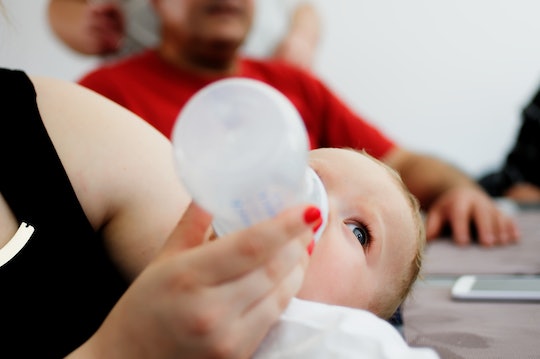 Attention parents and caregivers: It's time to check the purified water you use for your baby's formula — ASAP. That's because the Kroger Company has recalled Comforts FOR BABY Purified Water with Fluoride Added after complaints about mold were received, according to the U.S. Food & Drug Administration. Testing of the water reportedly revealed the mold to be Talaromyces penicillium. But, here's the thing, though: You might not actually be able to see it with the naked eye. So here's how to tell if your Comforts FOR BABY water was recalled.

This recall is an important to watch out for because, according to the Centers for Disease Control and Prevention, inhaling or touching mold can cause allergic reactions in some people. These can include symptoms similar to hay fever — such as sneezing, a runny nose, red eyes and a skin rash — and may occur immediately after coming into contact with mold or later. Molds can also trigger asthma attacks for those who have asthma and are allergic to mold. Furthermore, molds can cause irritation to the nose, eyes, throat and lungs, even if a person isn't allergic to them.

The FDA reports that drinking water contaminated with Talaromyces penicillium may particularly affect babies who have HIV or other conditions that compromise the immune system. Caregivers who believe their infants might be affected are advised to contact their health care professionals right away.

Customers who have purchased affected jugs of Comforts FOR BABY Purified Water with Fluoride Added gallon jug can return it to the store for a full refund, according to the FDA. In the meantime, the Kroger Company has reportedly instructed its stores to remove the recalled products for their shelves. If you have more questions, you can the company at 1-888-SAFEFOOD between 10 a.m. and 4 p.m. ET, Monday through Friday.

Parents who exclusively breastfeed or are still awaiting their first little one's arrival might wonder why jugs of water are used to make formula in the first place. According to Modern Mom, how you prepare infant formula can affect your baby’s health and while many parents opt to buy formula power or liquid concentrated formula — rather than the more expensive, ready-to-use formula — in certain situations, it requires either boiling of tap water or buying purified water. (And honestly, the jugs of water sound infinitely more convenient to me.)

So for parents counting on the fact that the gallon-jug of purified water they're buying is safe for their babies, the fact that mold has been found in the water intended for infants is indeed concerning. It's also important to note that this isn't the first time this brand of purified water was recalled for similar mold concerns.

Until the issue is resolved, it might be a good idea for caregivers to switch brands or stick to boiling tap water, as directed by the FDA, and toss out any affected jugs.