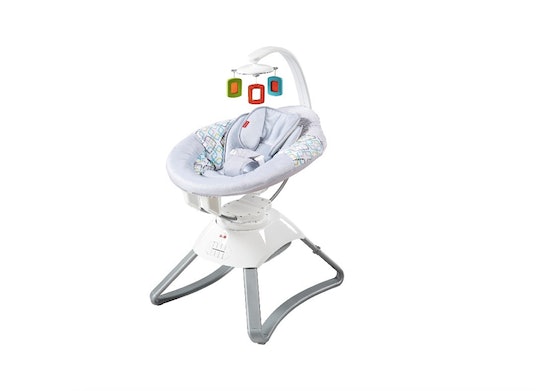 Fisher-Price Is Recalling 63,000 Of These Infant Soothing Seats Due To A Fire Hazard

Usually, getting a new toy or product for your baby is exciting, especially if it helps to distract them or put them to sleep. But now that a variety of Fisher-Price infant motion seats have been recalled due to a fire hazard, you'll want to know if you have one in your home. The company issued a recall on Monday for about 63,000 of the soothing seats, according to the U.S. Consumer Product Safety Commission, after it was discovered that the motors could overheat, therefore leading to the safety risk.

A spokesperson from Mattel told Romper that the Fisher-Price recall was voluntary and no injuries have been reported due to the safety concerns. "Children’s and families’ safety is always our top priority at Mattel," the statement read. "Our long record of safety is why Fisher-Price is the #1 most loved and trusted brand by Moms. The actions we are taking today are in support of maintaining that highest level of trust."

The company asked those in possession of one of the recalled seats to visit service.mattel.com, where you can find out more information about the recall and how to get a refund.

Because a fire hazard is not something to ignore, parents will want to know if their infant motion seat has been recalled. Here's how you can find out.

Fisher-Price has released the exact model numbers of the seats impacted by the recall, so it should be fairly simple to figure out if you need to return yours. The CPSC outlines the precise Fisher-Price Soothing Motions Seats model numbers that should be returned include:

Additionally, the Smart Connect Soothing Motions Seats with model number "CMR39" should be returned as well. You can find the model number on the bottom of the seat's motor and you can also find images of the five recalled seats here to get a better idea of what's included.

If your baby's motion seat is one of the specific models listed above, you should stop using it immediately. Fisher-Price has already received "36 reports of the product overheating, including one report of a fire contained within the motor housing," according to the CPSC. Fortunately, as previously stated, the company caught the safety risk before anyone got seriously hurt as there have been no reported injuries due to this recall.

Fisher-Price is refunding customers the standard cost of the product, which runs about $160, according to the company. The soothing seat sold at Buy Buy Baby, Target, Toys "R" Us, Walmart, other stores nationwide, as well as on Amazon.com and other websites, ABC News reported, and the models that are impacted by the recall were sold between November 2015 and October 2017.

Those across the border will want to have a close look at their seats as well, considering that about 2,000 of the recalled seats were sold in Canada.

Indeed, it's a pretty popular product, as it does quite a lot. "The seat bounces, sways, or bounces and sways together," the CPSC describes of the seat's capabilities. "The seat also vibrates, plays 10 songs and nature sounds, and has an overhead mobile."

It's likely that this is a pretty adored product amongst parents, as it probably does a pretty good job of lulling little babies off to sleep. Although recalls — especially focusing on products for little ones — can be quite startling, it's important check right now if your baby's motion seat is one of the potentially dangerous ones. As all parents know to be true, safety always comes first.

More Like This
12 Of Jack Black’s Best Parenting Quotes
Netflix Reveals The Official Teaser Trailer for Wednesday
Kristin Bell Shared Some Sweet, Rare Photos Of Her Daughters From A Family Vacation
Florida Court Tells 16-Year-Old She's Not "Mature" Enough To Have An Abortion