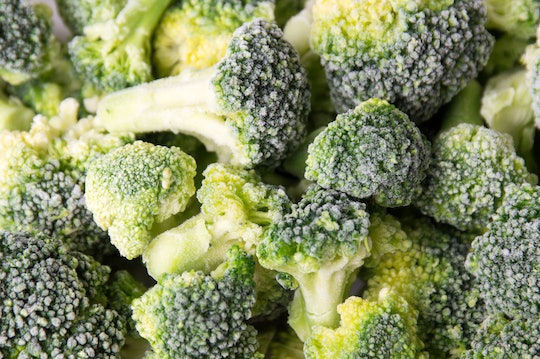 It's been a rough season for veggies. After a couple of other recalls on fresh and frozen vegetables, such as romaine, this year, now there is a recall on frozen broccoli. So if you stock the freezer with bags of florets to toss into pasta and stir fries for quick weeknight dinners, you might want to double-check yours and here's how to tell if your frozen broccoli was recalled.

On Wednesday, a recall was issued on Private Brand Frozen Broccoli Cuts (16 oz.) being sold at Stop & Shop, Giant, and Martin's nationwide after listeria was found on a sample tested by regulators, according to NBC News. Romper's request from Stop & Shop, Giant, and the Connecticut Department of Consumer Protection, which issued the recall, was not immediately returned.

New Haven's WTNH News 8 reported that the recall is voluntary and an entirely preventative measure. The product recalled has a sell-by date of March 15, 2020 and a UPC code of 68826700926, according to a recall statement. Although the stores have removed all of the bags from the shelves, as NBC News affiliate WJAC, if you have one sitting in your freezer, you can throw it out or return it to the store for a full refund. You can also call 1-800-767-7772 for customer support if you have other questions.

It's always a bit frustrating when food is recalled, but when it happens before any illnesses, it's a good sign that regulations are working. Although it can be scary to think of what other bacteria might be lurking in your fridge.

Listeria can be very serious. According to the Centers for Disease Control, listeriosis is an infection caused by Listeria monocytogenes. It most often affects pregnant women, newborns, people with weak immune systems, and older people. According to the CDC, it's rare for people in other groups to get sick with a listeria infection. For pregnant women and older people, it's usually a mild illness that passes. The symptoms include fever, and flu-like symptoms like fatigue, muscle aches, stiff neck, headaches, and confusion. None of that sounds like fun, but it's not exactly fatal if you get to a doctor.

For pregnant women, listeria is much more serious. The CDC explains that listeria can affect a fetus and lead to a miscarriage, still birth, premature delivery, and life threatening infections for a newborn. The American College of Obstetricians and Gynecologists (ACOG) says that listeria can cause blood and brain infections, along with kidney and heart problems for the fetus or newborn. So it really is important for pregnant women to avoid listeria to the best of their ability and check in with their doctor as soon as something feels wrong.

Your doctor will be able to test for listeria with a quick lab test and then you can treat it with antibiotics. When it comes to preventing listeria, things are a little more complicated, especially since so many of us buy our food at grocery stores and have no control over the safety of packaging processes. The strange thing about listeria is that it can grow in warm and freezing temperatures. It used to be linked to just deli meats or hot dogs, as FoodSafety.gov noted, but recently listeria has been linked to soft cheese, celery, sprouts, ice cream, melons, and now frozen broccoli florets.

There are some things you can do to prevent listeria. For example, the CDC recommends that if you cut a melon, you have to keep it at 41 degrees or colder for seven days and then toss it. Melons that are left room temperature for more than four hours should be tossed out — which is one thing a person vulnerable to listeria might want to remember at those summer BBQs.

For deli meats and hot dogs, you should toss open packages after just 3 to 5 days, according to CDC, and make sure that juices from the packaging doesn't get on any other food. Meanwhile, if you're stacking sprouts on your salads while pregnant — be very careful. The CDC doesn't recommend eating them raw if you want to prevent a listeria infection.

If you don't have a weakened immune system and aren't pregnant, the risk of infection should be fairly low. But in the meantime, don't risk it and toss your frozen broccoli florets from Giant and Stop & Shop.