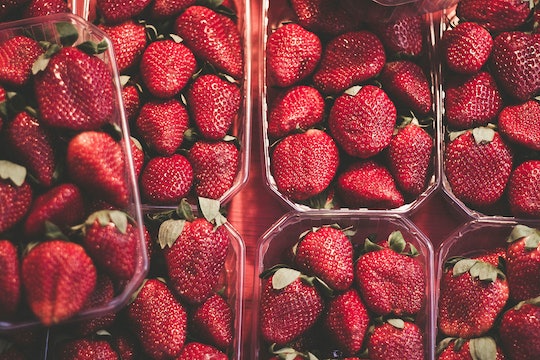 How To Tell If Your Frozen Strawberries Were Recalled

A batch of frozen strawberries has caused a hepatitis A outbreak in Virginia. Forty cases have emerged, stemming from multiple locations of the Tropical Smoothie Cafe chain. Smoothies made by the Cafe used frozen strawberries sourced from Egypt, which have since been "voluntarily and immediately removed" from all Virginia locations, according to the company's CEO Mike Rotondo. Many are checking their own freezers in fear of a similar, infectious outcome. Here's a rundown on the current status of hepatitis and frozen strawberries, as well as how to tell if your frozen strawberries were recalled.

In a statement released on Aug. 19, company officials were quick to note that "Egyptian strawberries represent a fraction" of the company's strawberry sources, with the majority of its strawberries coming from California and Mexico. Tropical Smoothie Cafe's website provides an FAQ about the incident in efforts to quell consumer fear. The company justifies its decision to use imported strawberries due to the high volume of smoothies that they produce each day, saying: "In order to meet our quality and sweetness specifications, our supplier has sourced fruit from various geographic regions." Truly, the company uses quite a lot of strawberries; Tropical Smoothie Cafe's Online Menu lists 16 of 28 smoothies that contain strawberries.

As of now, the FDA hasn't recalled any frozen strawberries. The CDC has not listed this hepatitis A spread as an outbreak, or even acknowledged it on its website. Currently, the majority of U.S. strawberries are grown in California and Florida, though statistics show that the U.S. frequently imports its berries. According to 2014 statistics, of the 224 million pounds of the U.S.' imported, frozen strawberries, 82.1 percent were from Mexico and 5.4 percent were from Chile. (Seeing as strawberries are in season from April to August, one could ask why Tropical Smoothie Cafe needed to import from a nonconventional source at all.) Checking where your strawberries were grown or shipped from, though, might help put your mind at ease. As long as they're not from Egypt, they're safe to blend at home.

The Virginia Department of Health has recommended that anyone who had a Tropical Smoothie Cafe smoothie from August 5-8 should seek out a vaccine or immune globulin to prevent hepatitis A. More cases of hepatitis A may continue to emerge from the Egyptian frozen strawberries, as it can take up to 50 days from infection to present itself. The VDH also notes that "frequent handwashing with soap and warm water after using the bathroom, changing a diaper, or before preparing food can help prevent the spread of hepatitis A." Hygienic steps like these can take your hep-A prevention a step further.