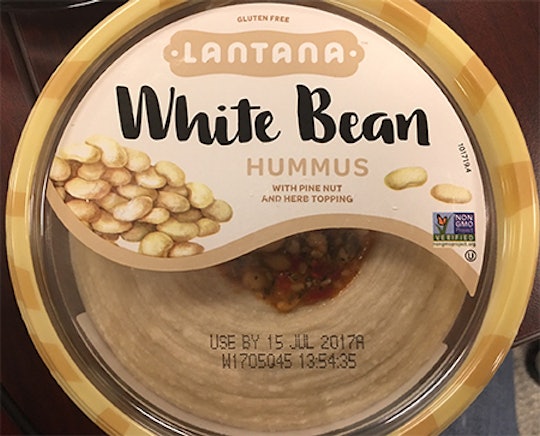 How To Tell If Your Hummus Was Recalled

Everyone enjoys hummus. It's delicious, great on pita bread, and can serve as a sandwich spread in place of mayonnaise. Unfortunately for hummus lovers, three brands of the Levantine chickpea dip have been pulled from the shelves. Worried? Here's how to tell if your hummus was recalled, because it affects Walmart & Target.

NBC News reported that, on Monday, food manufacturer House of Thaller voluntarily recalled select 10-ounce packages of its pine nut hummus products because of a potential listeria contamination. According to the U.S. Food and Drug Administration, ingredient supplier HVF, Inc. informed the Tennessee-based company about the possible health risk posed by its roasted pine nut topping, which is used in certain hummus varieties. A routine sampling test came back positive for Listeria monocytogenes contamination, prompting the recall.

The Listeria monocytogenes bacterium causes listeriosis, a potentially fatal food-borne illness that can cause flu-like symptoms. People infected with listeriosis may experience fever, diarrhea, muscle aches, stiff neck, headaches, confusion, loss of balance, and convulsions within one to four weeks after eating the contaminated food, according to the U.S. Centers for Disease Control and Prevention. Listeriosis during pregnancy can lead to miscarriage, premature labor, stillbirth, or life-threatening infection of the newborn.

The CDC has reported more than 19,000 listeria outbreaks between 1998 and 2015, leading to 373,531 illnesses, 14,681 hospitalizations, and 337 deaths. The FDA has not been informed of any illnesses related to House of Thaller's products, according to NBC News reported.

House of Thaller is urging people to not eat potential contaminated products. The company is also asking anyone who has bought a recalled product to contact customer service at 855-215-5142 during business hours.