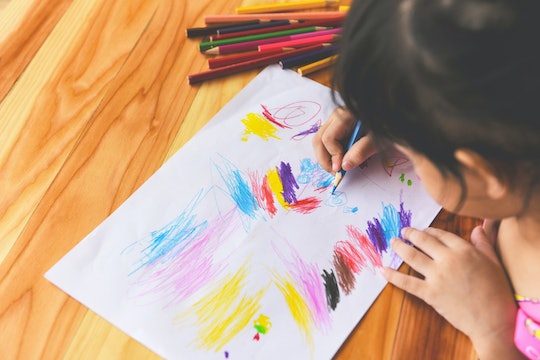 Here's How To Know If Your Kid Is Color Blind, Because It Can Be Hard To Tell

I never really stopped to think about it until recently, but so much of childhood is related to color. Adults ask toddlers to name their favorite colors almost as much as they ask them to make animal sounds (guilty). "Red Light Green Light" is an actual game; I’ve seen full episodes of kid’s TV shows devoted to learning different hues (Daniel Tiger will really suck you in, let me just say.) But what if your child won't tell you what color the sky is? How can you tell if your child is color blind?

The truth is, whether or not it’s intentional, children are adept at hiding their color blindness. This is in part because society assumes that everyone experiences color in the same way. Kids may simply guess a color when asked, or change the subject.

Though it's hard to tell if your toddler is color blind (many parents don’t realize until their child's in school) color blindness is not uncommon; as per the Color Blind Awareness organization, “If you have a son, he will have a one in 12 chance of being [color] blind.”

The probability climbs significantly if your child’s maternal grandfather is color blind. The condition affects boys much more readily because, as Dr. Rob Darzynkiewicz, Chief Medical Officer of Hazel Health, tells Romper, “[color blindness is] based on genetics. It's passed down from your parents, typically your mother. The gene for red-green and blue vision can be found on the sex chromosome X. Women have XX and men XY. So if one X has the gene that is not working well, but the other X works you will probably be fine. That's why girls are rarely color blind. For boys, they only get one X gene from their mom, and if it's the faulty one, they're at risk for being color deficient.”

Children develop at different rates, so if you feel your child is slow to identify colors, by no means does it mean that they’re color blind. A fascinating article written by Melody Dye of The Scientific American pointed out that learning colors can be especially hard in English because we use the shade indicator before the noun it's describing, or “prenominally” ⁠— the blue crayon, for example ⁠— but putting the color last can actually be more helpful. Dye wrote, “Say 'the balloon is red'... and you will have helped to narrow 'red-ness' to being an attribute of the balloon, and not some general property of the world at large. This helps kids discern what about the balloon makes it red.'

Echoing this idea, Patrick Burke, Fellow in the Department of Ophthalmology at Children’s National in Washington, D.C. tells Romper “[Color is] a surprisingly difficult concept to fully grasp, and the skill can take a couple of years – sometimes till age 5 - to solidify.”

“It's believed that by 5 months... children can see color, but it takes a few years to verbalize it," Darzynkiewicz tells Romper.

"If by 3 they are an active talker but don’t seem to care about playing the 'what color is this' game, it may be a clue.”

I realized in researching this article that I wasn’t clear on exactly what color blindness even is or what it's caused by. If you’re in the same boat, in brief, Burke says: “Color blindness more accurately can be called color deficiency, since most people with this trait still see some colors rather than a complete absence of color. It results from a genetic mutation that affects the cells that detect color in our eyes. This makes it very difficult or impossible to distinguish between certain colors, and causes two different colors to look exactly the same.”

Color blindness is passed genetically, and according to Darzynkiewicz, the diagnosis can be a frightening one to parents because of how it sounds: "We often say a child has a red-green deficiency, rather than saying they are color blind.” Color-blindness most commonly causes red and green to look the same, and can also be present in colors like purple and brown which contain traces of reds and greens. The National Eye Institute explained that “blue-yellow color-blindness is rarer than red-green color-blindness,” but it’s still a possibility.

Beyond the signs you may expect, an inability to discern between red and green crayons, for example, Darzynkiewicz tells Romper that other signs of color deficiency can include "using the wrong color, for example, using green to color in a red fire hydrant, or sensitivity to bright lights and trouble focusing on coloring worksheets… [Children] may be very suspicious of new food and want to smell anything new that they eat.” Both experts point out that children with color deficiencies may have very strong sense of smell.

A Catch-22 within the color deficiency diagnosis, as Burke says, is that “Most eye doctors wait until children are old enough to actively participate in testing (around 4 to 6 years old), since the tests can be unreliable before that. However, it's important to make this diagnosis early so the child's school can be alerted and lesson plans can be adjusted accordingly.” The Ishihara Color Test is the most prevalent test for red-green color-blindness; the test is best given to a child under doctor’s supervision as certain computer screens can skew the colors and render the test inaccurate.

While I won’t sugarcoat to the point of saying certain things won’t be more challenging if your child is color blind, the deficiency will not affect their health or vision; in fact, according to the Archimedes Laboratory Project, people with color blindness will likely have better night vision and see more variations in luminosity.

Plus, you can do several things to help set up your child for success. Darzynkiewicz suggests that once your child is reading, make sure their markers and crayons are labeled with specific colors to avoid unnecessary frustration. You can also make every adult who cares for your child (tutors, coaches, teachers, babysitters) aware of the situation so they avoid “unnecessarily creating scenarios where their child may feel uncomfortable, such as playing a sports game with red versus green uniforms, or playing checkers on a red-green board.” It’s a good idea to talk to your school to avoid a situation where your child hears they are incorrect about colors, and may start to think they're not smart or capable. You can normalize color deficiency by talking openly about it with your child, and creating a plan for them to advocate for themselves when you’re not around.

Finally, Darzynkiewicz says it’s essential to stop to consider how your child views the world. “You can always adjust your thinking every day: ‘we are parked by the street light’ instead of ‘we are parked by the red car’ or ‘let’s try that striped shirt’ instead of ‘let’s try that green shirt’. If they're frustrated it may be about color perception, so don’t be afraid to ask. Let them know you are there, you care and want to learn from their experiences.”

More Like This
The 16 Best Subscription Boxes For Every Kind Of Kid
My Toddler Ate Play-Doh, What Happens Now? Don’t Freak Out
Why Do Toddlers Line Up Toys? Experts Explain This Classic Toddler Behavior
Real Parents Share What Time They Let Their Kids Rip Into Gifts On Christmas Morning