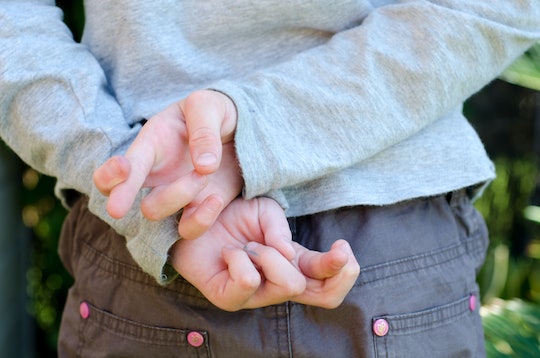 One of the hardest parts about parenting is knowing how to tell if your kid is lying, especially if they're already proficient in the art of truth-stretching. Although lying and avoiding the truth is a normal part of childhood and growing up, it's important that parents nip any bad habits in the bud. But that end of the equation is often easier said than done.

In younger children, it's often very apparent that they're not telling the truth. I can tell for certain whenever my almost-two-year-old blames her younger sister (or even the dog) for something I know she did. But in older kids, and even into the tween and teen years, their lying techniques can be a bit more advanced, making it harder to catch them in the act.

Once you know that your chid is lying, coming up with a plan of action is even more important the the lie itself. More often than not how you handle their behavior will determine how they choose to act in the future, according to Parenting, and setting a good example yourself is the best route to do just that. With these techniques in your arsenal, learning how to be a human lie detector will be a little bit easier.