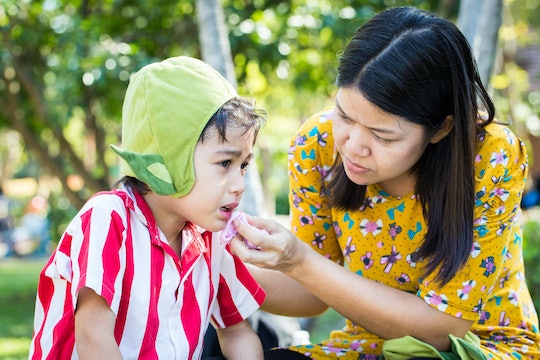 I am the master of disaster. When my genes were replicating to complete my genetic structure, I missed whatever connection there was supposed to be to give me balance. I'm a hot mess express who's broken more bones than I care to admit in such a public forum. Unfortunately, I seemed to have passed this little trick of the genetic lottery to my son. He's, well, he's a total klutz. All limbs and feet with no balance. He falls a lot. More than once I've had to ask his pediatrician how to tell if your kid's nose is broken, because he's fallen right on it. Again.

Thankfully, children are pretty resilient, and their noses are flexible and tiny. This means that they're more resistant to fracture than adults, according to St. Luke's Hospital in Kansas City. However, that doesn't mean it can't happen, especially if their noses take a direct hit from something like a baseball or basketball. Harvard University noted that symptoms of a broken nose can include bruising, swelling, bruising around the eyes, bleeding from the nose, if the nose appears twisted or distorted, or if one or both nostrils are blocked and your child is unable to breathe.

While broken noses may be more rare in children than they are in adults, they're actually quite a bit more worrisome. Whereas you or I may break our noses and mostly worry about the need for plastic surgery and what it will look like after it heals, according to Harvard University, the consequences in children are more dire. They wrote that "a broken nose in a child is more likely to cause long-term deformities or breathing problems because a child's nasal bones and cartilage have not finished growing." That's why immediate treatment is necessary to determine the best plan of action for your child.

West End Pediatrics suggested that the symptoms that need to be seen immediately are "nosebleeds that won't stop after 20 minutes of pinching the nostrils closed," if there's a wound that is open or might need sutures, if it's definitely broken on sight, if there's clear fluid dripping from the nose, if there's restricted breathing on either or both sides, and if they're under a year old.

True story — I had a professor in nursing school who had a nearly Voldemort-like nose, and whose voice sounded as though every word that came from his throat was put through a synthesizer for ultimate nasal sound. When we began studying bone structure, he pointed to his own face and said "this is what happens when you play rugby at 8 years old, break your nose, and your dad thinks he can fix it himself." It was a real "scared straight" moment for everyone in the class. We went dead silent as he continued, "That's why even if you don't think you need a doctor, you need a doctor."

However scary it is, and important to care for, it's not always a cause to rush to the emergency room. Cindy L. E. Gellner, M.D., a board-certified physician specializing in pediatrics, told the University of Utah Health Radio in an interview, "If you're not sure if your child's nose is really broken, wait a few days and let the swelling go down. If you're not sure, and your child can breathe OK, and the nose isn't crooked, wait about four to five days, to see what the nose looks like after the swelling is gone." She advised that you can give Motrin for the swelling and pain, and make sure to ice it.

But she also noted that sometimes you can't wait. "If your child's nose is crooked, or they can't breathe out of it, they need to be seen in the ER. X-rays won't help diagnose a broken nose, and if there's a concern that your child's nose needs ENT to see them urgently, a CT scan may be done to see how bad the damage is, and how quickly it needs to be fixed."

In this case, it's best to call your pediatrician, talk to them, and they can guide you to the best care for your child. As for me and my kid, we'll be over here in this bubble I've erected to save us from ourselves.