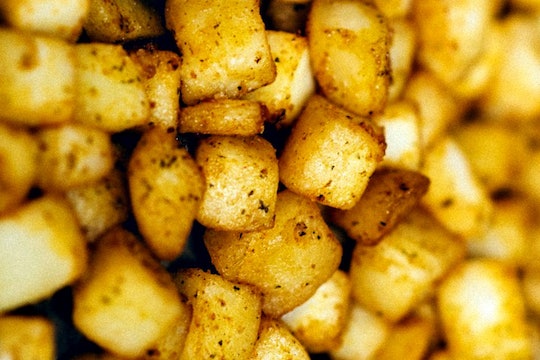 As if the world wasn't already strange enough, a recent batch of McCain hash browns were recalled because they contained pieces of golf balls in them. Yes, that's correct, golf balls. McCain Foods USA didn't immediately return Romper's request for comment, but according to the Food and Drug Administration, McCain voluntarily recalled the hash browns because they believe that the golf balls were harvested with the potatoes.

Luckily, no one's been injured or anything yet, so please feel free to take a minute and laugh. Because, really. Of all the things to find in your food, golf ball pieces aren't the first thing that comes to mind. Then again, neither are bats. What is going on with random things in people's groceries these days?

The hash browns were sold under the brand name Roundy's, at Marianos, Metro Market, and Pick ‘n Save markets in Illinois and Wisconsin. In North Carolina, South Carolina, Virginia, District of Columbia, Delaware, Florida, Georgia, and Maryland they were sold in Harris Teeter stores.

If you've purchased either of those hash browns after Jan. 17, you can check the back of the package for production code B170119. If there's any other production number on the bag, it's not affected by the recall and will be golf ball free. Phew.

Need a visual? Check out the labels below and see if your product matches:

Customers can return the products to a store for refund or just discard. In a statement, McCain spokespersons noted,

Food safety remains a top priority for McCain Foods USA, Inc. and we have full confidence that all appropriate steps are being taken to protect our consumers. McCain is working cooperatively with the Food & Drug Administration and the respective supermarkets to ensure the affected products are removed from the marketplace.

Bats and golf balls aren't the weirdest things to be found in packaged food, just in case you were wondering. Here's a shortlist of the strangest things found in food products over the last few years:

In 2010, a batch of Fruit Loops was recalled because customers reported a nasty odor came from the packaging when they opened it. It was reportedly due to a faulty liner.

A Pakistani gum imported by an Indiana company called "Toxic Waste Bubble Gum” was actually found by the FDA to have really high levels of lead in it. What are the odds?

Last year, Tyson foods had to recall a bunch of frozen chicken nuggets because customers found pieces of plastic up to 21 millimeters long. Tyson regularly runs its food through a metal detector, but the plastic slipped by anyway, for obvious reasons.

Earlier in April, Fresh Express recalled its Organic Marketside Spring Mix salads after two customers found a decomposed bat in their product — after already mixing up and eating some of the salad. The company noted that it was highly unlikely other products were affected, but issued the recall anyway, out of an abundance of caution.

So sure — golf ball bits in your hash browns might sound odd, but at least it's not totally unprecedented.