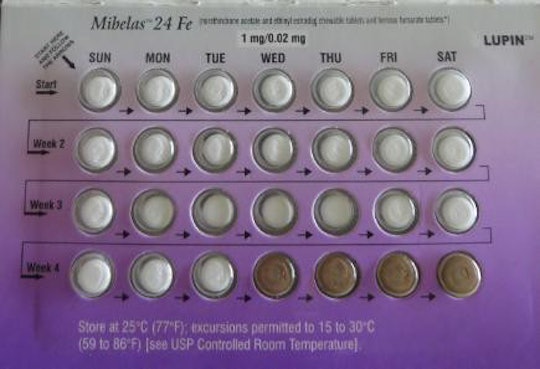 Anyone on birth control knows how important it is to take the pill on time, every day, in the right order. But diligence may not have mattered for people taking Mibelas birth control pills. News broke this week that the Mibelas 24 Fe brand of oral contraceptives has been pulled from the market due to faulty packaging. Not sure if you're affected? Then here's how to tell if your Mibelas 24 Fe birth control has been recalled.

According to Refinery29, Lupin Pharmaceuticals, Inc. voluntarily recalled Mibelas 24 Fe because of a packaging error that placed the pills out of order. The U.S. Food and Drug Administration (FDA) explained in its recall announcement that Mibelas 24 Fe's packaging was rotated 180 degrees, causing the four darker placebo pills ahead of the 24 white active tablets. The defective packaging increases the chances that Mibelas 24 Fe users will take the pills out of order if the reversed order is not noticed, putting them at risk for unintended pregnancy. The packaging error also obscured the lot number and expiration date, Refinery29 reported. Lupin did not immediately respond to Romper's request for comment.

According to the FDA, Lupin has pulled Mibelas 24 Fe from wholesalers, clinics, and retail pharmacies nationwide. The recall affects single 28-day packs and three-wallet cartons with the lot number L600518 and expiration date of May 31, 2018.

This is not the first time oral contraceptives were recalled because of a packaging mistake. According to Tonic, Qualitest Pharmaceuticals, a former subsidiary of Endo Pharmaceuticals, voluntarily recalled eight birth control brands in 2011 because of defective packaging. A lawsuit filed against Qualitest in 2015 claimed that more than 100 women across the country became pregnant, unintentionally, after taking pills that were packaged incorrectly, Tonic reported. A representative for Endo Pharmaceuticals told Romper that it does not comment on pending litigation.

According to the FDA website, Lupin Pharmaceuticals announced the recall on May 25 initially after a confirmed market complaint. However, the recall didn't make the news until this week.

People who own a defective pack of Mibelas 24 Fe should contact their doctor and return the pills to the pharmacy as soon as possible. Users unable to read the lot number can refer to Mibelas 24 Fe's National Drug Code, which is 68180-911-11 for the 28-tablet pack and 68180-911-13 for the three-wallet cartoon, according to Refinery29.

Consumers concerned about the birth control recall could also contact Lupin Pharmaceuticals during business hours at 800-399-2561. You could also report any negative side effects or problems with Mibelas 24 Fe to the FDA's MedWatch Adverse Event Reporting Program.