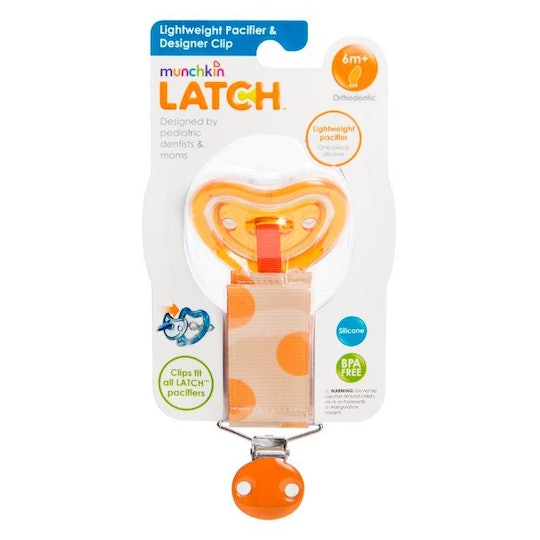 Parents across the country will want to check their diaper bags and registries this week, as popular baby gear manufacturer Munchkin has issued a voluntary recall of more than 180,000 pacifiers over concerns that the products pose a choking hazard for babies. So far, the company has received several reports of the clip cover on its Munchkin Latch Lightweight pacifiers detaching from the pacifier, according to CBS News. According to the official recall notice by the U.S. Consumer Product Safety Commission, no injuries have been reported. Still, Munchkin has advised parents to stop using the product immediately. Worried parents and caregivers will want to know how to tell if your Munchkin pacifier has been recalled and the easiest way to get a replacement. At the moment, simply returning the pacifier to retailers may not be an option.

More Like This
10 Hilarious Tweets That Perfectly Capture What Moms Are Going Through
226,000 Smoke Alarms Sold At Walmart, Home Depot, & More Stores Have Been Recalled
Vaccinated People Can Ditch Masks. Where Does That Leave Kids?
Pregnant Olympian Shawn Johnson Cried When Her Daughter Was Sad At Drop-Off

According to the CPSC website, Munchkin has received 10 reports — five in the United States and five from Canada — involving choking risks posed by pacifiers sold in five different styles: designer, rattle and heartbeat clips with zero months plus natural shape pacifiers, and designer and rattle clips with 6 months plus orthodontic pacifiers. The products are available at nearly all major retailers, according to the CPSC announcement, including Babies R Us, Target, Walmart, and Amazon, as well as on the Munchkin.com website.

If the pacifier and clip are still packaged, it should be easy for consumers to tell whether there’s cause for concern. More information on the recall posted on Munchkin.com said that the recall includes model numbers MKFE0391, MKFE0392 and MKFE0393, so parents could simply check the unopened package to see if their product is included in the notice.

But, as the CPSC website points out, the pacifiers have been on store shelves since March 2014, so it’s possible that many of the products are already in use by families. The company’s official website included a simple method for checking those pacifier sets, too: the model number can also be found on the label sewn onto the strap of the pacifier clip, so parents can do a quick inspection to see whether their child’s favorite paci has been recalled.

Fortunately for parents, the CPSC instructions for getting a refund or replacement in either situation are pretty straightforward: return the products to Munchkin — not the retailer — immediately. The company has offered to replace the pacifier sets with a 2-pack of the Latch Lightweight Pacifier, packaged without the pacifier cover and clip. Or, consumers can request a full refund on their purchase from Munchkin, which should fall somewhere between $11 and $15, according to the CPSC recall notice.

More information on the recall is available on the company’s website, or by calling 877-242-3134.