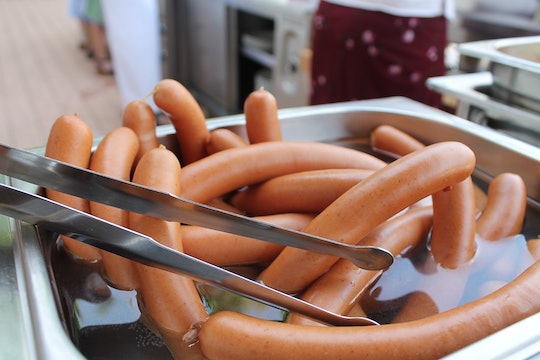 Just as backyard barbeque weather kicked into full gear, over 200,000 pounds of Nathan’s and Curtis hot dogs have been recalled after the manufacturer, John Morrell and Co., received complaints that metal had reportedly been found in some of the products’ packaging. So before you fire up your grill for Memorial Day weekend, you might be wondering which Nathan’s and Curtis hot dogs were recalled and which ones are safe to purchase for your upcoming festivities. Romper has reached out Nathan's and Curtis for comment on the recent recall and is awaiting a response.

According to a report the U.S. Department of Agriculture (USDA), approximately 210,606 pounds of ready-to-eat hot dog products produced by the Cincinnati-based manufacturer "may be contaminated with extraneous materials, specifically metal." The recall was prompted after the manufacturer received a small number of complaints of visible metal flakes between the hot dogs and the packaging film, Kathleen Kirkham, senior vice president of corporate affairs for Smithfield, the packaging company for John Morrell, told Romper in a statement.

The affected beef franks were produced on Jan. 26, 2017 and the two following products should be tossed out immediately if they're in your household:

The products subject to the recall were shipped to retailers and grocery stores across the nation, so you'll want to be extra careful when selecting your hot dogs as the affected products would have also been stamped with the establishment number "EST. 296" on the side of the package.

Here's a look at the packaging for the recalled hot dogs:

Consumers who have purchased these products should not to eat them and should either immediately throw them away or return them to the place where they were purchased.

"John Morrell is confident that this is an isolated incident coming from unusual wear on the packaging line and does not impact any other products," according to the Smithfield statement. "This recall impacts only a miniscule percentage of the billions of pounds of products John Morrell produces annually. Prior to this isolated incident, John Morrell had zero USDA recalls of any food product for three consecutive years."

According to the USDA, there have been no confirmed reports of adverse reactions or injury due to consumption of these products. However, if you are concerned about an injury or illness related to this recall, consumers are urged to contact their health care provider.

If you have any others questions about the recall, you can call 1-877-933-4625 and contact the company for a full refund by visiting www.smithfieldconsumeraffairs.com.

While food recalls are always a bit unsettling to read about, it's good to know these products are being taken off shelves right away and consumers are now aware of the incident because safety is always a top concern for any parent.