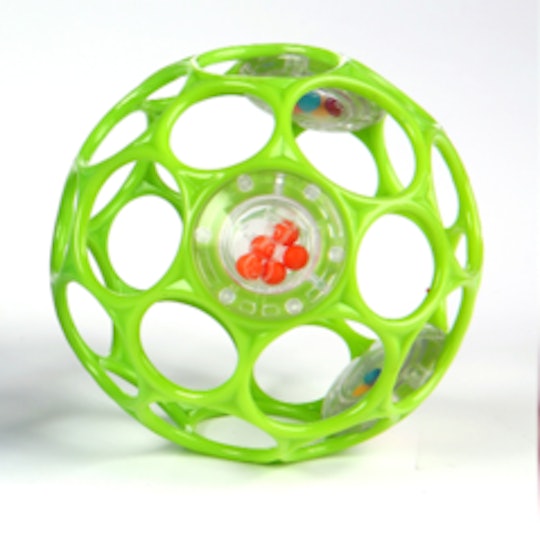 How To Tell If Your Oball Rattle Is Recalled

On Thursday, infant toy manufacturer Kids II announced a massive recall of nearly 700,000 baby rattles. Here's how to tell if your Oball Rattle was recalled: according to Parents, all pink, blue, green, orange rattles sold between January 2016 and February 2017, bearing the model number 81031, are included in the recall. The model number can be located on the inside of one of three clear plastic discs on the toy, and the date code is found on a small triangle on the inner surface of the rattle. Units bearing the codes T0486, T1456, T2316, T2856, and T3065 are included in the recall. Kids II did not immediately return Romper's request for comment.

The discs contain beads, which make a pleasant rattling sound, but if those discs happen to break, those beads become serious choking hazards; according to the U.S. Consumer Product Safety Commission, Kids II has received 42 reports of the discs breaking and releasing the beads, including two reports of beads found in children’s mouths and three reports of kids gagging on the beads. About 680,000 units were sold by Target, Walgreens, Walmart, Amazon, Babyhaven.com, Diapers.com, ToysRUs.com, Walgreens.com and other retailers nationwide, and an additional 17,000 units were sold in Canada. They retailed for between $5 and $8.

Consumers are urged to take the rattles away from children immediately and contact Kids II for a full refund. Visit the Kids II website to check if your product is affected and register for a return kit and refund, or call manufacturer at 877-243-7314 between 8: 00 a.m. and 5:00 p.m. Eastern Time if you have any questions. Once you receive your return kit, you'll be required to remove all three rattle discs and send them back to Kids II. A refund of $7.99 can be expected within eight weeks.

There are rigorous guidelines in place in the United States for toys marketed to children under 12, and even stricter guidelines for products intended for children under 3. In general, small parts that could pose a choking hazard are banned from baby toys, however, there is an exemption for rattles, provided that "small objects are internal and provided that such rattles are constructed so that they will not break or deform to expose or release the contents either in normal use or when subjected to reasonably foreseeable damage or abuse." Toys are required to be tested to ensure that they meet such requirements, but unfortunately, some do slip through the cracks. If you're concerned about a baby choking on small parts, it might be best to avoid rattles entirely, or provide them only under adult supervision.