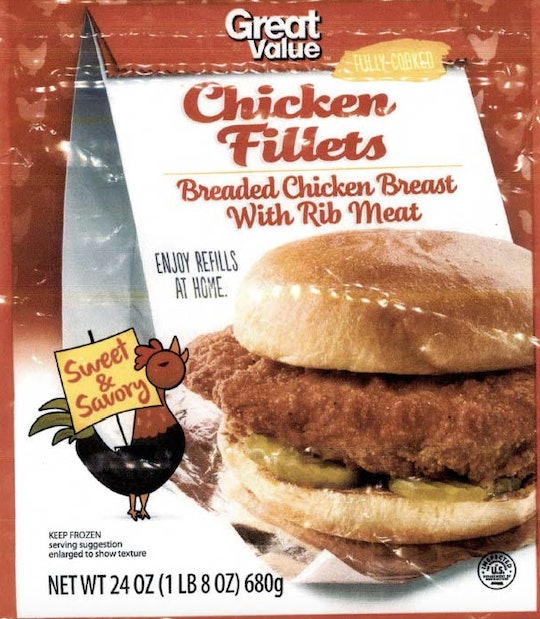 As if the political back and forth and sense of impending doom weren't enough, now, a major food company has issued a recall for thousands of its products, including chicken nuggets, patties, and more. OK Foods, Inc. has addressed complaints of finding foreign objects, such as metal pieces and more, in their chicken. And since families everywhere rely on the frozen chicken products for easy weeknight dinners and lunches, many are wondering how to tell if your OK Food chicken products were recalled. Thankfully, the United States Department of Agriculture (USDA) has released more information that may make it easier.

The Food Safety and Inspection Services sector of the USDA provided more details on the recall this week, explaining that "approximately 933,272 pounds of breaded chicken products ... may [have been] contaminated with extraneous materials, specifically metal." Twenty specific products from the company are potentially affected, according to the company. The problem was brought forward when OK Foods received five separate complaints of metal materials being discovered in their products. Romper has reached out to OK Foods for additional comment on the recall and is awaiting a response.

Along with specific guidelines for understanding if your OK Foods purchase was affected, the company also compiled a list of the 20 products up for recall, advising that customers throw them out, and definitely not consume them. A list of label images can also be found at the FSIS website.

Among the products issued for recall, are "shaped nuggets with rib meat," "chicken breast fillet fritters," and various shaped breaded patties. It's also worth noting that all but one product was listed as being "fully cooked," so if you have raw chicken products from the company, they are likely safe from the recall.

The recall was issued on March 23 and affects products that were made from Dec. 19 to March 7. And although "no confirmed reports of adverse reactions due to consumption of these products," the company, as well as the USDA, has urged consumers not to eat the chicken anyway.

The recall is due to metal contamination, which the company suggested was from metal conveyer belts the products rode on during manufacturing. No illness has been reported after consumption of contaminated products, but that doesn't mean the recall shouldn't be taken seriously.

While it's unclear how large the metal pieces were that were found, it is still a safety hazard, and particularly dangerous for children who might not notice anything suspicious. So, as experts urge, the best thing to do is to throw out the product, and be extra vigilant when you're at the grocery store next time.