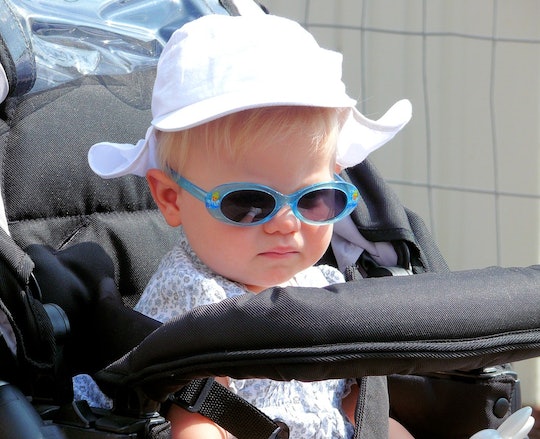 How To Tell If Your Pacific Cycle Stroller Has Been Recalled

Jogging strollers are great for fitness-minded parents of toddlers, but here's some not-so-great news: One brand is recalling some of its products due to "crash and fall hazards." So before you head to the track tomorrow (go, you!) with your toddler in tow, make sure you know how to tell if your Pacific Cycle stroller has been recalled. It's important because some kids have gotten hurt because of a defect in the front wheel, but there's totally a remedy for that.

Pacific Cycle announced Thursday, July 7, that's it's recalling its Instep and Schwinn swivel wheel jogging strollers (about 217,600 of them) because the front wheels of these products have become loose and fallen off. That sounds kind of scary, and it undoubtedly was for some moms and dads: The company has received reports of 215 injuries caused by the wheel becoming loose or unstable on 132 of the stroller. And those injuries were no joke, as they included head injuries, sprains, lacerations, bumps, bruises, and abrasions.

The recalled strollers are both single and double seaters, and the Instep Safari, Instep Grand Safari, Instep Flight, Schwinn Turismo and Schwinn Discover Single and Double Occupant Swivel jogging strollers are affected. To determine whether the model number of your stroller is one of the ones affected, click right here.

Pacific Cycle is urging customers not to return their stroller to the store; instead, they should contact the company to receive a repair kit, which includes a replacement mechanism for securing the front wheel, according to its website. The affected strollers were sold online at retailers like Amazon.com, Target.com, Toys-R-Us.com, and Walmart.com between January 2010 and June 2016. That's a pretty wide timeframe, so it's possible that some kids outgrew that stroller without ever having a problem (or their parents just skipped their runs, which is possible too).

Pacific Cycle collaborated with the U.S. Consumer Product Safety Commission to create the repair kit, and there's also a handy how-to video that accompanies it. Kids may not enjoy it as much as Finding Dory or The Jungle Book, but it's meant to keep them safe. Find it here.

Whatever the situation, concerned customers can contact Pacific Cycle at 877-564-2261 from 8 a.m. to 5 p.m. CT Monday through Friday, or email customerservice@pacific-cycle.com. Call or email to get ahold of one of those repair kits. There's also a separate process to report an incident, if you've experienced one.