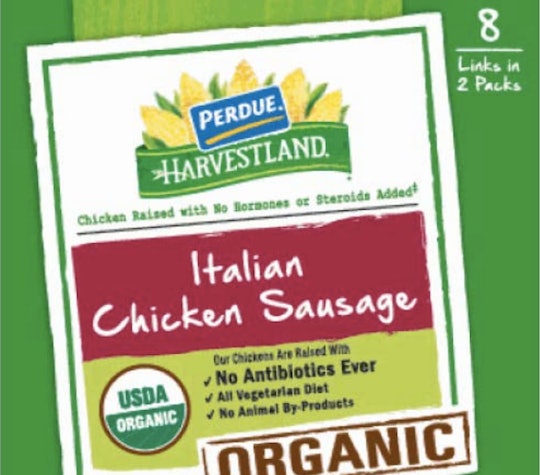 How To Tell If Your Perdue Chicken Sausage Was Recalled

Summer is quickly approaching, and with it, plenty of tailgating, picnicking, and cook-outs with family and friends. But before you reach into your refrigerator and grill up some of those chicken sausages you recently bought, you might want to hit the pause button and double check a few things. Unfortunately, Perdue recently recalled its chicken sausage products because of a contamination safety risk.

On Saturday, the United States Department of Agriculture released a statement about the voluntary chicken sausage recall, with information vital to consumers of Perdue's Italian Chicken Sausage links. Over 2,100 pounds of chicken sausage was voluntarily recalled, according to the USDA, due to contamination with extraneous, blue plastic materials in the sausage.

Being able to tell if your Perdue chicken sausage was recalled should be easy. According to the USDA, the voluntary recall only pertains to 24 ounce plastic packages containing eight links of fully cooked ready to eat sausage. The label should say "PERDUE HARVESTLAND Italian Style Organic Chicken Sausage" with package code 64405 and a sell by or freeze by date of 6/25/17. Your package of chicken sausage links will also contain the establishment number P-2617 inside of the USDA mark of inspection, if they are a part of the recall.

"We determined the source was plastic from a pair of safety goggles that was inadvertently introduced into the raw material before the sausages were stuffed," Andrea Staub, Senior Vice President of Communications told Romper in a statement. "This would have resulted in a minimal amount of consumer packages potentially containing sausages with plastic. However, out of an abundance of caution, we have decided to recall all packages of sausages produced in the same product run."

Not everyone across the United States who has purchased this chicken sausage needs to worry about the recall. According to a press release from Perdue Farms, the product was exclusively distributed to BJ's club stores in the northeast United States. The sausage links were produced on March 27, but the problem was not discovered until May 5, according to the USDA. There have not been any confirmed reports of injury due to the consumption of the sausage.

So what should you do with your Italian chicken sausage? The USDA has urged customers to not consume the product and has advised them to either dispose of them or return the package to the store from which they purchased the sausages for a refund. Those with further questions about the voluntary recall are encouraged to call Perdue Foods consumer relations department at 877-727-3447.