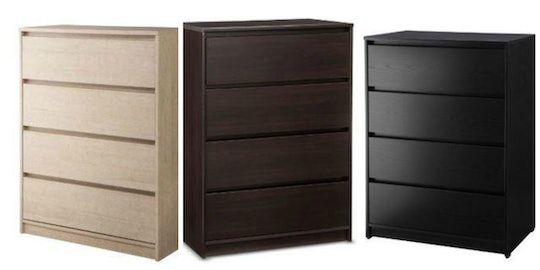 Target Is Recalling 175,000 Dressers That Can Tip Over & Trap Kids

Oh, Target. It is the store that has everything and is so hard to resist — especially when you go in looking for one product and leave with 14 items you never thought you needed. Target certainly does know how to get to you, not that it's a bad thing. Although Target is (arguably) the most perfect store to exist, people should pay extra attention to a voluntary recall issued on Wednesday for the sake of their safety. If you've recently got bit by the Target bug and purchased a dresser from them in the past few years, you will definitely want to know how to tell if your Target dresser was recalled after they were found to be dangerous around children over tipping hazards.

On Wednesday, the Consumer Product Safety Commission announced the voluntary recall for about 175,000 four-drawer dressers by the brand Room Essentials, purchased throughout the United States over the past three years that were sold in Target stores and online (Around 3,000 of these dressers were also purchased in Canada, according to the Consumer Product Safety Commission.)

The dressers were voluntarily recalled due to a safety hazard — according to the CPSC, the dressers are unstable if they're not anchored to a wall, causing them to pose "serious tip-over and entrapment hazards that can result in death or injuries to children." Now that doesn't exactly sound like a piece of furniture that most parents want in their homes.

Luckily, it is super easy to tell if your Room Essentials dresser was voluntarily recalled.

You can tell if your dresser was a part of this voluntary recall by its model number, which was printed on the box the dresser came in. Here are the model numbers for the dressers:

But if you're like most people, you probably threw away the box when you put together the dresser in your home. Who could blame you?

In order to identify the dresser without the model number, you can identify the dresser by its physical attributes. The four-drawer dresser came in three colors: black, espresso, and maple and according to the CPSC, measures 41 7/8 inches tall by 31 1/2 inches wide by 15 11/16 inches deep.

From there, simply remember the time you purchased the dresser and how much you spent on it. According to the CPSC, the dressers were sold in Target stores and online on Target's website from Jan. 2013 through April 2016 for $118. (If you purchased it online, you can try searching your email archives for the receipt, too.)

But if after that, you're still confused as to if your dresser was part of the voluntary recall, then you should probably call Target and have them help you. Those with a dresser can contact Target at 800-440-0680 with questions about the recalled items.

And there is a solution to this voluntary recall — people who own the dresser should return it to any Target store for a full refund.

Target said in a statement to Romper:

If a guest owns an item that has been recalled, he or she should return the product for a full refund. Guests who have purchased recalled items on Target.com receive an e-mail letting them know the product has been recalled, and guests who purchased the item with a Target Redcard may receive a voicemail alerting them to the recall. If the product was purchased at a Target store, the guest may return the item for a full refund. No receipt or proof of purchase is necessary to return a recalled Target-branded product to a Target store.

This is one voluntary recall that you might not want to ignore. The CPSC received 12 reports about these dressers tipping or collapsing, including tipping over on two 3-year-old children. However, no injuries involving the dressers have been reported.

Its important to take this seriously. The CPSC has developed a program called Anchor It! to protect children from falling furniture. According to Anchor It!, every 30 minutes a child in the United States is injured from a furniture tip over incident and 46 percent of tip over fatalities occur in a bedroom.

If this voluntary recall means that you have to give up your beloved four-drawer dresser from Target, don't be disappointed. Target is selling an incredibly similar dresser (with four drawers) by Room Essentials for $119 in two colors online, so can easily replace your current one.

You don't have to give up your Target obsession because of this voluntary recall, but it definitely helps to know about these things as a matter of staying safe.