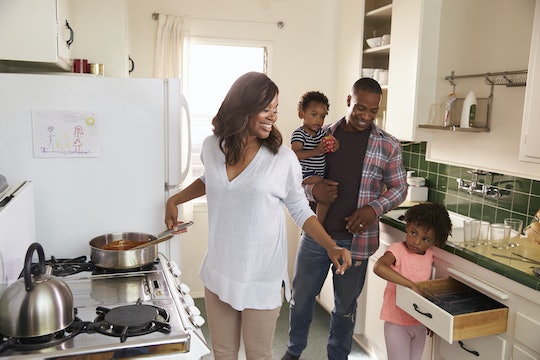 Here's How To Tell If Your Toddler Will Be Cooperative & Caring, According To New Research

Many parents hope their kids will grow up to be cooperative and caring, the kind of person who's happy to help someone else when they can. And so they do their best, attempting to teach their kids and model for them what that might look like, and then hope that it all works out. But there might actually be a way to predict if your toddler will be cooperative, according to a new study by researchers at the Max Planck Institute for Human Cognitive and Brain Sciences and the University of Virginia.

The study, published in PLOS Biology, found that babies who take note of and pay attention to "fearful faces" are more likely to exhibit altruistic characteristics when they're toddlers and preschoolers. Researchers looked at the eye movements of babies to take note of how much attention they gave to faces. Though their reactions to happy and mad faces didn't have an effect on their altruistic traits, their reactions to scared faces was a different story.

Additionally, previous research argued that there might be an association between how much attention little ones paid to people who were scared or nervous and increased amounts of what's called prosocial behavior, which, as Verywell Mind noted, is a pattern of behavior that is designed to benefit other people in some way, like when your toddler adorably shows you how empathetic they can be.

"From early in development, variability in altruistic helping behavior is linked to our responsiveness to seeing others in distress and brain processes implicated in attentional control," Tobias Grossmann, the lead author of the study and research team leader, explained in a news release. "These findings critically advance our understanding of the emergence of altruism in humans by identifying responsiveness to fear in others as an early precursor contributing to variability in prosocial behavior."

Altruistic characteristics are oftentimes linked to cooperation with other people and really, that makes sense. If you're willing to go out of your way to do something for someone else who needs it, you're probably also able and willing to pitch in when something needs to get done or be there for someone when they're going through a tough time.

Toddlers do generally seem to be predisposed to being helpful and cooperative, even if they don't seem to always do exactly what you want them to do, when you want them to do it. A study from researchers at the University of Pittsburgh found that as toddlers get older, they generally appear to be more cooperative sooner in an exchange with adults. In other words, young toddlers might not understand that help is needed until later in the conversation, but older toddlers can piece it together and take action sooner.

There are also ways that you can boost your toddler's ability and willingness to be cooperative as well, like asking them if you can take part in whatever they're doing and giving them a little bit of power over the cooperation process, as Dr. Erin Leyba LCSW, PhD, noted in a piece for Psychology Today. But if your little one seems to pay close attention whenever anyone is upset or scared, they might be grow up to be altruistic and cooperative all on their own.