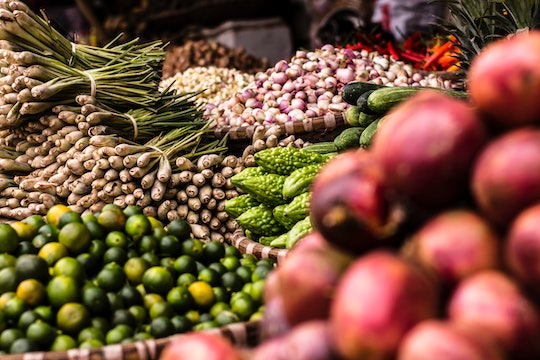 In light of a recall posted by the FDA on Monday for CRF Food Products, a frozen vegetable supplier used by Trader Joe's, you may be wondering how to tell if your Trader Joe's veggies are affected by the recall. It's an important question for all the Trader Joe's lovers out there, because CRF Food Products announced that some of its products have potentially been contaminated with a harmful bacterium called Listeria monocytogenes. So, here's your guide on how to properly investigate the veggies you may have purchased from Trader Joe's, because there are severe health risks associated with listeria.

According to the CDC, Listeria monocytogenes causes listeriosis or listeria, a serious infection that primarily affects older adults, pregnant women, newborns, and adults with weakened immune systems, though it can rarely affect people who don't have these risk factors, too. It can cause bacteremia, meningitis, death, miscarriages, and stillbirths. Its symptoms include, fever and muscle aches, and sometimes, diarrhea and other gastrointestinal issues. Here's the CDC's list of symptoms of listeria in pregnant women:

Pregnant women: Pregnant women typically experience fever and other non-specific symptoms, such as fatigue and aches. However, infections during pregnancy can lead to miscarriage, stillbirth, premature delivery, or life-threatening infection of the newborn.

People other than pregnant women: Symptoms can include headache, stiff neck, confusion, loss of balance, and convulsions in addition to fever and muscle aches.

Which CRF Food Products have been recalled?

CRF Food Products issued a voluntary recall in cooperation with the FDA and CDC, recalling all of its frozen organic and traditional fruit and vegetable products manufactured and processed in the CRF Frozen Foods facility in Pasco, Washington, since May 1, 2014. This includes 358 consumer products that are sold under 42 separate brands, with "best by" or "sell by" dates between April 26, 2016 and April 26, 2018. See the full list of recalled products and associated brands here.

What Trader Joe's Items Are Affected?

In a statement released by Trader Joe's, the food chain announced that all of its frozen vegetable products supplied by CRF Food Products containing the code "BF" in its product description are a part of the recall. Here are the recalled products listed by Trader Joe's:

Trader Joe's announced that it has removed all products from CRF Food Products in its stores, out of an "abundance of caution." Customers with products containing a "BF" code, similar to this sample code posted by Trader Joe's: "115 16 BF 22:58 C PRODUCT OF USA," can return them to any Trader Joe's store for a full refund.

Customers with any questions for Trader Joe's can contact the company's customer relations line at (626) 599-3817. Trader Joe's cautioned customers to not eat its products containing the "BF" code.