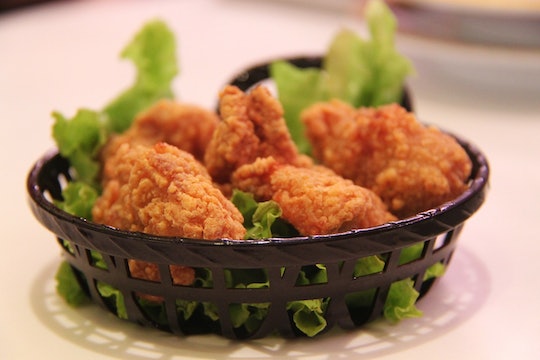 Were Your Tyson Chicken Products Recalled?

Usually, when you go to the store to buy food for yourself and your family, you can feel pretty safe about what you're getting. But, that doesn't mean there isn't the occasional food scare, of course. Remember the great spinach recall of 2006, when produce affected by an E. coli contamination stole the headlines? Or the myriad other times when a consumer has posted horrifying photos of the random items found in their store-bought food products? Recalls are unfortunately an unavoidable part of life these days, and now, a popular frozen chicken brand has rejoined the ranks of those issuing a preemptive strike before things get out of control. So, how can you tell if your Tyson chicken products were recalled? The company has issued a warning for over 2.4 million pounds of its products, but there's a slight catch.

According to the United States Department of Agriculture, Tyson has recalled "ready-to-eat breaded chicken products due to misbranding and undeclared allergens," which impacts products that were packaged any time from Aug. 17, 2016 to Jan. 14, 2017. The main concern with the recalled chicken, Tyson says, is that it failed to list milk as an ingredient. Because milk is a known allergen, the USDA has warned of the possible contamination of eight varieties of the products. In an email to Romper, a Tyson spokesperson noted, however, that "the affected product was not sold in stores."

However, in case you're really concerned the recall might affect you, here's what you should know. The affected chicken products include:

(For a more detailed list of recalled products, including packaged dates and sizes, you can click here.)

Despite the large quantity of products that have been recalled and are potentially dangerous, understanding that the recalled chicken was sold for "institutional use," only should come as some comfort to those who love the brand. As Tyson reiterated in its statement on the matter, "The recall is limited to foodservice customers, and affected products are not available for purchase in retail stores."

So, even though milk allergies are, in fact, serious — and actually one of the eight major food allergens known — this latest recall likely won't affect you or your family, unless you were somehow able to purchase Tyson chicken in bulk, from a non-retail vendor.

More Like This
Does The FDA's Plan To Limit Lead In Baby Food Go Far Enough?
Score Big On Super Bowl Sunday With The Best Frozen Apps From Trader Joe's
41 Costco Appetizers To Level Up Your Super Bowl Party
10 Delicious Dips For Game Day & Also, Life
What Parents Are Talking About — Delivered Straight To Your Inbox