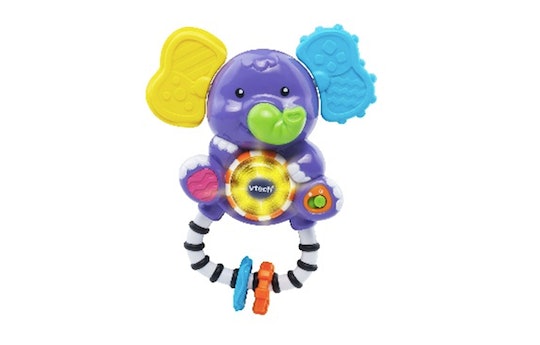 VTech Is Recalling 280,000 Of These Baby Rattles Due To A Choking Hazard

Parents: If you've purchased, or have been gifted, a specific type of rattle for your little one in the last year or so, you'll want to check to see if your baby's VTech rattle is included in a new recall after it was discovered that the toy could pose a choking hazard. According to the U.S. Consumer Product Safety Commission, nearly 280,000 toys have been impacted by the recall, so if you're not sure if yours could be one of those, you'll definitely want to double check. Romper has reached out to VTech for further comment on the reported recall and did not receive an immediate response.

The CPSC announced a recall on Jan. 25 for the shake and sing Elephant Rattle by VTech. Here's how the CSPC described the toy:

The rattle has a purple elephant with yellow and blue ears at one end and a black and white plastic teething ring at the other end. VTech is stamped on the elephant. The rattle is about seven inches long and the number 1848 is printed on the back of the rattle adjacent to the battery door. The rattle sings when a button is switched on.

The CPSC also noted that the toy's model number may also be 80-184800. The recalled toys were sold for about $8 at Walmart, Kmart, Meijer, Mills Fleet Farm, Seventh Avenue, as well as online stores like Amazon and zulily.com between November 2015 and November 2017, according to the CPSC.

The CPSC noted that consumers reported that small pieces of the toy were breaking off, therefore posing a choking hazard. Fortunately, according to local CBS News affiliate WCCO, there haven't been any reported injuries affiliated with the toy to date. "Vtech reportedly received five complaints that the ears on the toy broke off; none of the incidents resulted in an injury to a child," WCCO reported.

Additionally, VTech also recalled another popular toy that same day. The "Lights & Lullabies travel mobiles," also reportedly presented some safety risks, according to the CPSC. Specifically, the mobiles affected are the model numbers 80-503000 (blue) and 80-503050 (pink), and were reported to have faulty clamps holding the device to a baby's crib, therefore posing a risk to the infant sleeping. The CPSC reported that the mobiles were sold more recently than the rattles — from February 2017 through November 2017 for about $25 at Kmart, Walmart and online at Amazon.com and zulily.com.

According to the CPSC, VTech is offering two different remedy options for those customers who have discovered that their purchases have been compromised by the recall. For the Elephant Rattle, the company is offering full refunds for customers who contact VTech as well as "credit for a replacement product," according to the CPSC. For the mobile, the safety commission states that VTech is offering a "full refund or a replacement product."

On VTech's website,the company refers to the recall as voluntary and described its products as being "of the highest quality and tested to meet all applicable national and international safety standards."

Now, as any and most parents know, VTech is a pretty popular brand when it comes to baby toys and products geared towards kids. Just last November, the company announced that "its toys received more than 90 accolades from respected toy and parenting industry experts, toy advisory boards and retailers for the holiday season." So with 280,000 of the recalled Elephant Rattles possibly out there, it's clear that the company has many loyal customers.

Hopefully, the warning and recall came out just in time, and no children get hurt from the rattle. Again, if you aren't clear as to which rattles have been recalled, you can head out over to the CPSC's official report for more info.