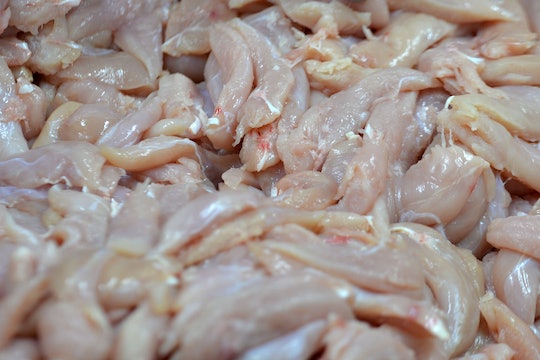 More than 4,000 pounds of ready-to-eat chicken breast items have been recalled after it was discovered that the poultry products may have been undercooked. The United States Department of Agriculture (USDA) issued the recall for the items distributed by Wayne Farms LLC, a Georgia company, on Friday, Nov. 18. Consuming undercooked meat can have serious side effects — such as salmonella, which can be especially dangerous for babies and older adults if not treated promptly — so it’s important to find out if your Wayne Farms chicken was included in the recent recall.

Romper reached out to Wayne Farms for comment regarding the recall, but did not hear back at the time of publication.

According to the USDA, the recall includes approximately 4,059 pounds of ready-to-eat chicken products due to undercooking, which were produced on Aug. 1, 2016 and Aug. 29, 2016. The items included in the recall were shipped to various retail and grocery stores in Florida, Iowa, Minnesota, Missouri, and North Dakota.

As the Wayne Farms logo is not very obvious on labels, consumers in the previously mentioned states will have to look very closely at the labels of the chicken in their freezers, refrigerators, and at stores to be sure if the products are included in the recall. Here's an example of what a Wayne Farm’s label looks like:

According to the USA, the products include:

In Minnesota, for example, the multiple locations where the Wayne Products were sold include: Bruce's Foods in Wyoming, Don's Food Pride in Appleton, Doug's Supermarket in Warroad, Lueken's Village Foods North in Bemidji, Plantenberg's Food Pride in Richmond and Service Food Market in Fergus Falls and Perham.

"The problem was discovered during a routine records review by the company when it was noted that a similar product had an appearance of being undercooked," the company wrote, according to the USDA's news release. "There have been no confirmed reports of adverse health effects due to consumption of these products."

The USDA reports that there have been no confirmed cases or reports of adverse health effects from consuming the recalled products, but it urges anyone who is concerned about a possible illness to contact their healthcare provider immediately.

If consumers do find that they have purchased these products, theyve been advised to throw them away or return them to store where they were purchases for a refund or replacement.

Eating undercooked chicken can make people very sick, so make sure to have a careful look at the labels on your chicken products before cooking or consuming them, especially if you're located in Florida, Iowa, Minnesota, Missouri, and North Dakota.