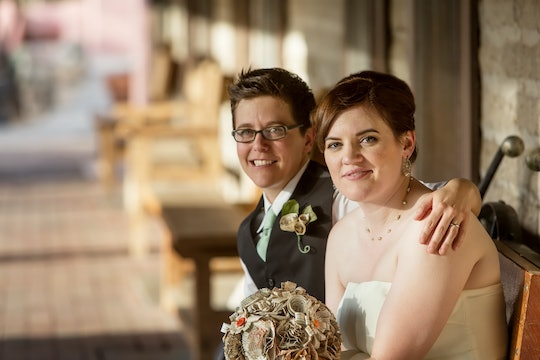 When you say "I do," those vows are supposed to be forever. Still, you know, stuff happens. I don't mean to be trite about marriage. But, at the same time, if you want to know how to tell in the first year of marriage if it'll work, you're so not weird.

After the honeymoon, when you're spending those first 365 days as a married couple, there are some pretty major indicators of whether or not your marriage will work. Why? Well, marriage ups the ante of your relationship because it's, like, legal and everything. Plus, you're spending time with each other's families and tackling things like taxes and the idea of having kids together. And after a year of being a couple in the eyes of the law and or your religion, not to mention the aforementioned blended family, there are signs that can tell you that your relationship is working or not, even after a year. According to Prevention, there are relationship red flags that therapists look out for when trying to figure out if a marriage has staying power.

A calendar year is filled with holidays, as well as daily celebrations or annoyances that indicate how you're faring as a couple. So, forget the seven-year itch, and start thinking about the 365-day assessment. How can you tell if you guys will grow old together? The following serves a guide to tell if you'll make it as a married couple after just one year.