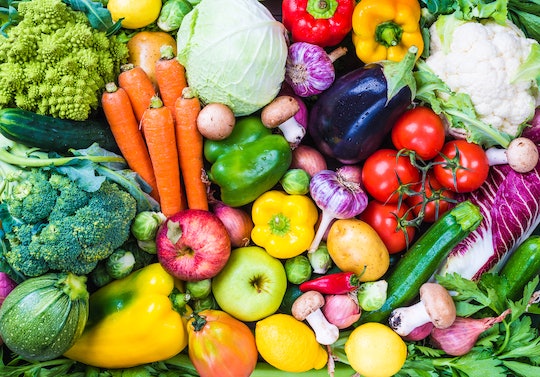 If you want to be healthy, eat your vegetables. But maybe check which kind they are and where they come from first, because a major supplier of packaged vegetables just issued a huge recall. So, you'll definitely want to know how to tell if your packaged vegetables were recalled due to the possibility that some of the veggies may have been contaminated with listeria, a type of bacteria that's not something to mess around with.

The recall in question comes from California-based supplier Mann Packing, according to a press release issued by the company. You may have seen their products in your local Trader Joe's, Whole Foods, Walmart, or Meijer, among other grocery stores. They sell all kinds of delicious-looking healthy goodies, from packaged cauliflower and broccoli florets to flavored Nourish Bowls. But recently a random sampling by the Canadian Food Inspection Agency found a positive result for "Listeria monocytogenes" in one of Mann's products, according to the company's voluntarily-issued recall notice.

Mann Packing did not immediately respond Romper's request for comment on the reported recall, but in a statement by Gina Nucci, the company's director of marketing and one of its owners, she wrote that the company issued the widespread packaged vegetable recall out of "an abundance of caution," and that public health authorities have not yet reported any illnesses associated with the recalled products.

First of all, the products were sold in the United States and Canada, and all of them had a "best if used by" date from Oct. 11 to Oct. 20 on the front of the package, according to the recall notice. So even if you have these packages lying around your fridge, you may be having second thoughts about eating them now anyway. While it's often pretty safe to eat something a few days past the "expiration" date, this is one of those times you shouldn't go through that long internal debate about whether something still looks and smells OK enough to ignore the warning on the label.

You'll want to check out this long list of products and UPC codes the Food and Drug Administration has marked as affected by the recall. And if you've got a package that fits the description, either toss it or return it to the store where you bought it for a full refund.

Whole Foods, Trader Joe's, and Walmart did not immediately respond to Romper's request for comment, while a spokesperson for Meijer wrote in an email to Romper:

It was NOT detected in any product Meijer sold. Meijer was simply the first retailer (of many) to pull the product and announce to our customers after Mann initiated the recall.

Meijer has issued a recall of its own based on the Mann Packing recall. That one affects products sold in Michigan, Ohio, Indiana, Illinois, Kentucky and Wisconsin.

So, what's all the fuss about anyway? Listeria is a nasty bacteria. According to the Centers for Disease Control and Prevention, it affects an estimated 1,600 people each year, and around 260 people die from it. Listeria can be particularly bad for pregnant women and newborns, as well as adults over the age of 65, and people with weakened immune systems.

The most typical side effects from a listeria infection are fever and diarrhea, but if it moves beyond the gut and becomes what is called "invasive listeria," the infection can lead to really scary symptoms like miscarriage and premature delivery in pregnant women, according to Live Science. Other potential symptoms for both pregnant and non-pregnant people include convulsions and loss of balance. Symptoms can show up as early as the day of the exposure, or as late as 70 days after, according to the CDC.

So double-check that list of affected products, and contact Mann Packing by calling 888-470-2681 or going to veggiesmadeeasy.com/products if you have any further questions about the recall. After all, the point of eating vegetables is to be healthy, not to get a nasty bacterial infection.