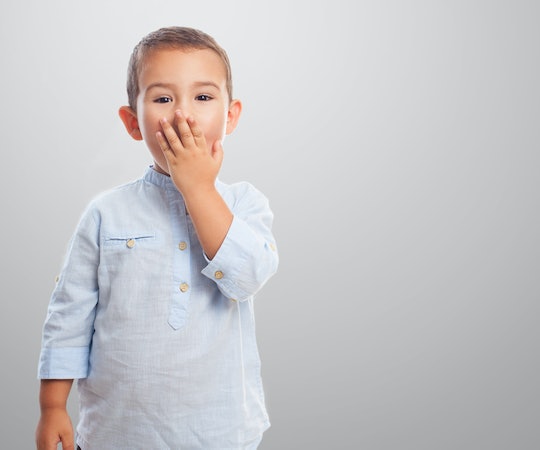 How To Tell When Your Kid Is Lying, According To A Former CIA Agent

One would imagine that if any parent would be adept at figuring out if their child is lying, it’d be Valerie Plame, a former covert CIA operations officer who somehow, in the middle of being a clandestine badass, also managed to have twins. But even Plame (who’s penned a best-selling memoir and several spy thrillers since leaving the CIA in 2007), admits that when it comes to her own kids and the truth, even she sometimes has no way of telling.

Although my 8-month-old daughter has yet to test my polygraph abilities, I clearly remember the first lie I ever told: When I was in pre-school my teacher Miss Mubarak told me that I couldn’t have any more saltine crackers during snack time, but I disagreed. So when she wasn’t looking, I ran over and grabbed some. A few minutes later Miss Mubarak noticed that the blue and white Premium box was open, and she asked me about it. I lied and told her I saw poor unsuspecting Christopher with the glasses do it. I am quite certain that Miss Mubarak did not buy my story, but since she couldn’t prove that the crumbs on me weren’t from the saltines I was given during snack time, I got off scot-free. The first lie of my childhood was a delicious success.

Perhaps if Miss Mubarak had had some of Plame’s training, then she might have been able to pin Crackergate on me, but, alas, poor Miss Mubarak was better at wearing scratchy mint green sweaters and teaching us the alphabet than she was at (pun intended) cracking pre-schoolers.

Not that Plame had it much easier. When it comes to her twins, she swears she hasn’t “consciously applied” her CIA training while raising them, but she does admit that the organizational skills she developed in the field and her ability to read body language have been the most helpful. “Everyone has a tell,” she explains, “and it’s not always in the eyes. Often it’s being fidgety or squirminess.” And, while there’s a popular (but not conclusive) theory floating around about liars looking up and to the right when being questioned, Plame contends that liars tend to actually hold your gaze too long: "It makes most humans uncomfortable to stare into eyes and not look away."

That said, while trying to maintain a normal level of eye contact, I decided to give the former CIA operative different fictional scenarios to see how the professional would handle:

You find that someone scribbled all over the walls in crayon. Both of your 2-year-old twins Caleb and Jesse had been coloring, and each insists that it was the other who did it. How do you know which one is lying?

“That is mission impossible. It’s way too young. They’re doing whatever they need to save their skin and it’s perfectly natural,” Plame says. “Instead of trying to pinpoint the perpetrator, I think it’s better to make sure they’re not near white walls with markable pens and crayons,” she laughs.

But after the writing is literally on the wall, how does a parent go about talking to children this young about lying? Plame says that one of the most important traits you can have in the CIA is “curiosity and the willingness to really listen.” She suggests that in this particular situation, getting a sponge or a Magic Eraser and giving them to the twins to help you remove the crayon marks while letting them take the lead in discussing how and why you’re all cleaning up the wall might lead you to the truth.

And, a freshly scrubbed wall.

You told your 4-year-old, Matthew, that he can’t leave the table until he finishes his dinner, which he was obstinate about in the first place. Minutes later, you hear a crash. You run into the kitchen to find Matthew’s dinner on the floor, the cat on the nearby kitchen counter, and Matthew looking at the food on the floor. Matthew immediately tells you the cat did it. Unsurprisingly, the cat is holding its cards close to its vest.

“Check the cat’s paws!” Plame says. Chances are that while Matthew is the one who dropped his plate on the floor, Plame suggests that the more important thing in this instance is getting Matthew to feel comfortable enough tell you the truth himself. "At this age, presumably you’ve been doing lessons about telling the truth,” she explains. Now is the time to figure out why he is lying and to lay the groundwork for him to not want to lie in the future. She says,

Don’t dangle the story over his head, but as you’re cleaning up, let him know that it’s both important that he tell the truth and that he understand that he won’t get in trouble. Then you can ask him if that really happened, if the cat really upset the plate.

Or, if that doesn’t work, you can always resort to good old-fashioned bribery: Whiskers von Fluffington says he will accept medical grade catnip in exchange for his testimony.

Six-year-old Jack has been reticent about doing his math homework all week. His 8-year-old sister Kylie offered to help, but you’re pretty certain she wound up doing the homework for him. She denies this is the case and Jack also insists he did it on his own.

“Unlike with the twins in the younger scenario, at this age I would separate them,” Plame says. Talk to the older one first because with an 8 year old you can make the case that they’re not actually helping their sibling. While it’s admirable that Kylie wanted to help Jack, at her age she should not only understand that the best things he can do for her brother would be to teach him how to do the problems on his own. As for Kylie lying about helping him, Plame says, “Explain to Kylie that lying actually hurts Jack, and that it’s important that he does his own work.”

If you find that Kylie is still not owning up to doing Jack’s homework for him, Plame suggests that you then explain to Jack that it’s against the rules to have anyone help you. “Don’t over explain and don’t over-rationalize, though,” Plame warns. “We use too many words, and we end up sounding like the teacher in a Charlie Brown cartoon.” In the end, you want them both to listen to you and to understand that a lie to help another is still a lie, and it can have lasting detrimental effects.

If, after speaking to both of them separately and still neither kid is copping to the alleged prevarication, then the easiest way to find out the truth would be to give Jack similar math problems to those found in his homework. If he’s unable to do them, then you’ll have your answer.

In the end, though, even the former CIA officer admits there’s no better polygraph than a parent. She says, “No one knows your kid better than you do. Parents know. They always know." Spoken like a true professional.