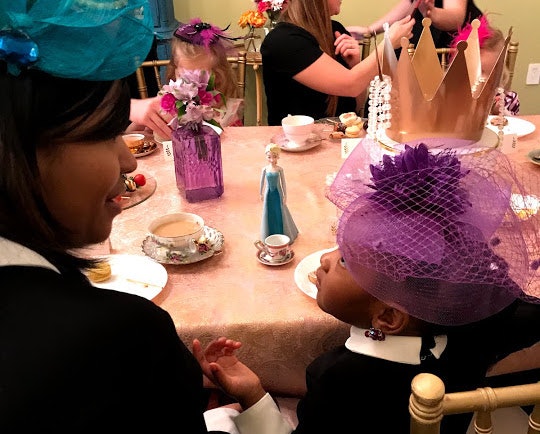 There are so many initiatives these days aimed at telling girls they are smart, brave, independent, inspiring and any other number of positive adjectives that don't reduce our girls to potentially nice, loving, and attractive homemakers and wives. We tell them they're clever, amazing... anything but "pretty." But there are reasons to tell your kid she's pretty, and ways to do it that don't f*ck her up for life.

As a grade-school alumna who wore a school uniform for 14 years — and attended an all-girls school for four of those years — I know first-hand what it's like to hide all signs of femininity under a baggy pinafore. It was a world apart from the fashion-forward university where I became obsessed with designer clothes. Planning my outfits each morning became time-consuming to a point where I’d opt to eat in the cafeteria in the all-girls dorm next door to avoid the social pressure of seeing boys, and feeling the need to look cool for them.

Fast-forward to today, two kids later, and my high school friends — from the single-sex school — are deliberate about complimenting my daughters when they see them, but for every “pretty” comment they conscientiously add, “and smart.”

Sometimes, I wish I grew up in a culture that actually did tell me I was pretty.

Beyond the general notion that placing an emphasis on looks is bad for girls because we know we are worth so much more, how bad is it to actually tell a young girl she’s pretty? Last year, a Northwestern University psychology professor Renee Engeln published Beauty Sick: How the Cultural Obsession with Beauty Hurts Girls and Women, in which she explained that "It's difficult to engage with the state of the economy, the state of politics or the state of our education system if you're too busy worrying about the state of your muffin top, the state of your cellulite or the state of your makeup."

Engeln is right. I was shy and awkward in college, so I made up for what I felt I was lacking in an affinity for expensive clothes that earned me clout with the cool crowd. I maintained a job at an expensive clothing boutique in Georgetown only to spend the majority of each check in the store, so I could be the cool girl at parties who was known for being well-clothed.

But on campus, I’d sit in my expensive clothes in the all-girls cafeteria where I felt comfortable. The co-ed cafeteria where everything happened was too daunting on school days. But sometimes, I wish I grew up in a culture that actually did tell me I was pretty so I'd have some confidence that didn't require me to break the bank or avoid boys.

So, in true damned-if-you-do and damned-if-you-don’t fashion, what is the solution? Don't be afraid to tell your daughter she's pretty — in fact, make sure you tell her you think she is beautiful. We all need to understand that we are beautiful.

This week I saw two celebrity fathers promoting confidence and self-esteem to their daughters in the most hilarious way — by using all of today’s internet speak, derived from the community of queer people of color in the 1980s, to boost their daughters. P. Diddy cheered on his three daughters as they cat-walked down a pretend runway, chanting “You are beautiful!” and “YAS, let’s go queen!” as each kid walked to Cardi B rapping over Bruno Mars’ Finesse beat.

Similarly, former NFL star Chad Johnson was making his rounds in his daughter’s Instagram comments with familiar lingo that she’d expect from her friends.

Author and relationship coach Shannon Bradley-Colleary offered a balanced perspective, akin to my own, in the Huffington Post, writing, “so yes, compliment your (children's) abilities. But don’t throw the baby out with the bathwater. Tell your children they’re beautiful, too. Because soon enough, the world will tell them different.”

The toxicity we are all reacting to every time we hesitate to call a girl "pretty" isn't countered by removing that word from our vocabulary. Messaging about appearance, about self-worth is everywhere.

We are all terribly capable of filling our own heads with negative self-talk, and I believe that by filling your daughter's (and son's) bucket with affirmation — about how you feel when you see their face, about their soul, that they are loved — you can ensure that when they ask themselves whether they are beautiful, the answer is: of course.