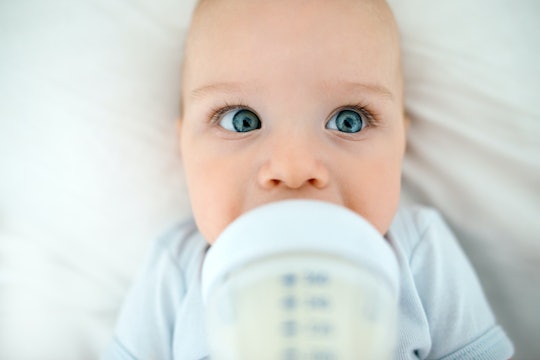 How To Test Breast Milk For Lipase

Breastfeeding moms know what a commitment nursing can be. If they have to return to work, or simply need a break from round-the-clock feeding, moms will typically express their breast milk and either refrigerate or freeze it to use later. Sometimes, upon warming the stored milk, they realize that it has a strange odor or taste. This is usually due to an excess in a protein called lipase. In order to keep from having to toss several stored ounces, you should learn how to test breast milk for lipase.

According to Healthline, lipase is released by the pancreas into the small intestine and helps the body absorb fat. It's found in breast milk and allows your baby to absorb the milk's nutrients. Too much lipase can cause expressed milk to have a soapy smell or flavor, and it can also cause it to spoil more quickly. Babies typically refuse to drink milk if its taste has changed due to lipase.

Although the Centers For Disease Control states that expressed breast milk will stay fresh in a deep freezer six to 12 months, in a regular freezer for three to six months, and a freezer compartment inside of the refrigerator for up to two weeks, if you have excess lipase in your breast milk those numbers will not apply. Even the CDC's guide for room temperature breast milk (six to eight hours) can be drastically less.

Before you bring out the hospital grade breast pump and begin storing a freezer full of breast milk that may have to be tossed, it's important to learn some ways that you can test for lipase at home.

Gretchen Bossio from That Mama Gretchen shared how she tested her breast milk for excess lipase. She expressed two ounces of milk, stored it in the refrigerator, and did a sniff and taste test at two, four, six, 12, 18 and 24 hours. In her case, the milk turned at 18 hours. This means that she will have to feed her baby expressed breast milk within 18 hours of pumping in order to prevent it from changing taste or odor.

There is a way that you can prevent your breast milk from turning due to excess lipase. Registered nurse Helen Anderson wrote in Fairhaven Health that to neutralize the lipase, you will need to heat your milk to 180 degrees before cooling and subsequently freezing or refrigerating. This can be done using a glass or metal bottle fully submerged in a bottle warmer and tested with a digital thermometer.

Anderson also suggests using a microwave if you are pumping at work. Typically, microwaving breast milk isn't recommended. The CDC warns that microwaves can kill nutrients in breast milk. However, if your baby is exclusively breastfeeding and your milk is at risk of spoiling, Anderson believes it is a good option as long as your baby is also drinking milk that hasn't been treated for lipase.

If your baby refuses your expressed breast milk even after being treated for lipase, or is striking against the breast, talk to your doctor or a lactation consultant for more suggestions.