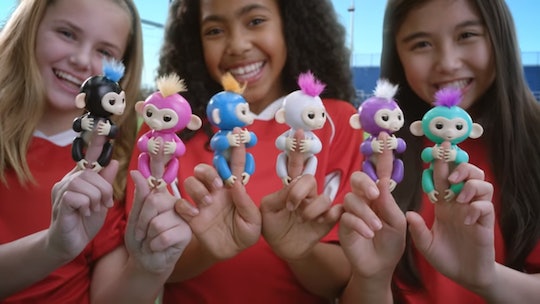 Here's How To Track Fingerlings Stock At Stores Near You

If you missed the boat on Hatchimals last year, it's time to get your butt in gear, because the hot new toy of the 2017 holiday season is already selling out in stores worldwide. If you're already filled with anxiety wondering how to track Fingerlings stock at stores, fear not; it's 2017, and you no longer have to drive all over town or — heaven forbid — make phone calls in order to locate one. There's a website for that! Let technology hunt down that tiny robot money for the kids while you work, Facebook, or just get on with your life.

ZooLert tracks both online and local store stock for a variety of hard-to-find products, from toys and video game consoles to computers and vinyl records. The website's real-time Fingerlings stock tracker updates every minute, and it can tell you which Fingerlings are available, how much they cost, and warn you when stock is running low. Just leave the site open on your desktop and you'll be alerted to any changes by your choice of three different animal sounds that your coworkers are sure to appreciate. If you're on the go, you can also set up text or email alerts.

If you're still confused on what the latest toy trend is, here's a quick catch-up: first of all, they're not potatoes. They're robotic monkeys that can cling to a child's finger or hang by their tails. They retail for about $15 apiece, and there are also three playsets available: a see-saw, a jungle gym, and of course, monkey bars complete with a swing. The playsets, which are packaged with exclusive Fingerlings, run between $20 and $40. Of course, that's if you can find one in a store. If you don't have a moral objection to resellers taking advantage of desperate parents, and you're in a position to play double or triple price, go ahead and give eBay a whirl.

There are six standalone Fingerlings monkeys, as well as four unique to the playsets (the seesaw comes with two, of course). Before you shop, make sure you know which one your kid wants, because getting the wrong body/hair color combination could lead to them being a social pariah for the rest of their life, or at least until middle school. Kidding! But I don't envy the mom whose kid had their heart set on a Finn or a Bella and ended up getting stuck with a Boris. Seriously, who named these? Every other one has the same name as no fewer than five of my kid's classmates, and then... Boris? But I digress.

The monkeys respond to sound, touch, and motion, and react if users change their position, pat them, rock them, clap their hands, or blow on them. They might laugh, chatter, or whistle, sing a song, snore, or blow a kiss. And depending on your kid's sense of humor, they might get a kick out of placing their hand flat over the tops of the monkeys' heads, which will result in a couple of different, shall we say, rude noises, depending on their position. Or maybe don't tell them about that particular feature. Just make sure to stock up on LR44 button batteries, because of course the manufacturer didn't choose to make your life easier by requiring a simple AA or two.

And just when you thought you'd finally nailed everything Fingerlings-related, there's more: as if the hard-to-find monkeys weren't enough, there's also a unicorn Fingerling called Gigi, according to Time, which is proving to be almost as elusive as an actual unicorn. Gigi was introduced as a limited release exclusively at Toys R Us in early September, and was only available in store on a one-per-customer basis. They're sold out for now, but they'll be back, and depending on stock, they may be available for purchase online eventually. Also coming soon: a sloth named Kingsley. Keep that stock tracker open, folks. This is going to get crazy.