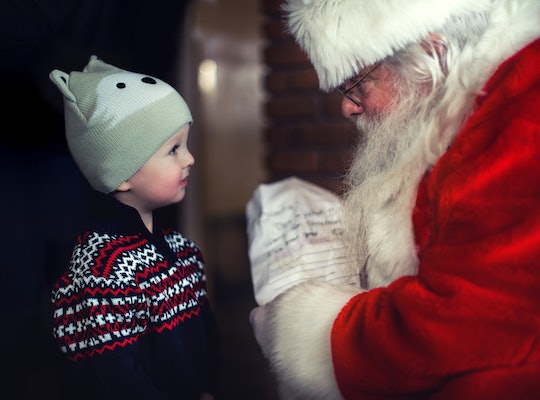 How To Track Santa With Your Kids

If your little ones are wondering where Kris Kringle and his reindeer are on Christmas Eve, parents and children can track Santa as he delivers gifts around the globe. The North American Aerospace Defense Command (NORAD) usually watches the skies for threats, but has also been keeping an eye on Santa’s whereabouts on his busiest night of the year for more than six decades. On Dec. 24, kids can call a hotline, log on to the command's website, or download various tracking apps to see when Santa is expected to come down their chimney.

The first option is to simply log on to the dedicated NORADSanta.org website, which went live early Christmas Eve morning and is available in eight languages: English, French, Spanish, German, Italian, Japanese, Portuguese, and Chinese. On the site, kids can see where Santa was last seen, where in the world he’s off to next, and how many gifts have been delivered so far.

Kids can also call 1-877-HI-NORAD (1-877 446-6723) and talk directly to a NORAD staff member who can tell them Santa's exact location at the moment. According to The Huffington Post, hundreds of volunteers at NORAD's Peterson Air Force Base — headquartered in Colorado Springs, Colorado — will also reply to emails sent to noradtrackssanta@outlook.com.

This year marks the 61st anniversary of the tradition that has given excited kids the ability to track Saint Nick as he travels on Christmas Eve.

"It all started in 1955 when a local media advertisement directed children to call Santa direct – only the number was misprinted," according to a NORAD press release. "Instead of reaching Santa, the phone rang through to the Crew Commander on duty at the Continental Air Defense Command Operations Center. Thus began the tradition, which NORAD carried on since it was created in 1958."

"On our website, we had 22 million unique visits last year," Preston Schlachter, a spokesman for NORAD, told The Colorado Springs Gazette, and added that there has also been a steady increase in calls. Last year Schlachter said they "had more than 141,000 phone calls."

Tracking Santa has become a decades-long tradition and has been helping families makes holiday memories that last for years. But even though watching the famous elf travel around the world is hard to take your eyes off of, kids must remember that Santa will only stop at their house if they are sound asleep in their beds.